Previously we’ve brought you movies that totally mess with your head, our collection of mind-bending movies that have seriously twisted our melon on watching and have no doubt done the same to countless others. Films that leave jaws dropped, heads scratched and viewers as confused as a chameleon in a bag of Skittles.

We’ve been raiding our own personal vault to uncover some more gems and bring to you the imaginatively titled, more movies that totally mess with your head.

If Back to the Future II took you a couple of watches to get your head around the time travel timelines, then it’s going to take you a lot more than that to comprehend what the hell is going on in cult movie Primer. This low-budget indie film sees two engineers stumble across how to make time travel possible, after intending to create a machine that reduces the gravitational effects on objects.

At first just using the machine for one purpose, to make some money, things are all hunky dory, but as with most films in this sub-genre things quickly go awry when they use the machine for other means.

It’s not long before overlapping timelines appear with multiple versions of themselves popping up, tangling time and creating a big old confusing, dangerous mess.

You might need to take an Open University course just to understand the extremely complex goings on here, that can feel like trying to solve a Rubik’s cube blindfolded, answers on a postcard from anyone who can shed some light.

Visionary Japanese director Takashi Miike isn’t known for sticking to the norm. All of his films at the very least touch on the bizarre and often feature dark subject matter in the extreme that can be akin to a waking nightmare. And so then to GOZU which is arguably his most mental masterpiece of all, and yes we have seen Dead or Alive and The Happiness of the Katakuris.

This mind-bending movie lulls you into some false sense of normality starting out as a standard Yakuza flick before the dial gets turned to surreal. The story follows Minami, a low-level gangster ordered by his gang boss to take an unstable member of the group to a remote location to be dealt with by a ‘cleaner’.

On the journey, the soon to be offed Ozaki dies and his body mysteriously vanishes in a run-down suburb. At which time things get properly weird with the strange creatures showing up, like the minotaur-esque monster who wears dirty white underpants, not to mention a middle-aged woman who bottles and sells her breast milk.

It has the appearance of random scenes thrown together with no rhyme nor reason, until that is you hear Takashi Miike’s explanation for it all. He based events and characters on those from Greek and Japanese mythology, with the story being a representation of Minami’s sexual awakening and realisation of his love for Ozaki. Which kind of makes sense of things, kind of. 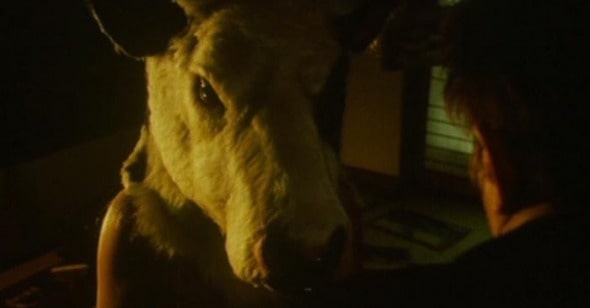 Aside from having one of the greatest titles in film history this Italian Giallo thriller is just downright odd. We’ll start with the plot, so we have Marco, a scientist who is breeding headless, boneless chickens at a high-tech farm as you do, oh and he also might be a serial killer.

Along with all that, he’s having an affair with a blonde Swedish lady called Gabrielle, and they’re plotting to do away with his domineering wife Anna, who at the same time is plotting with Gabrielle to in turn kill him. In fact, there’s quite a lot of plotting and it all becomes a bit of a head-scratcher.

With the dubbed version’s almost unhuman script delivered in an equally stilted manner and the jarring editing with strange combinations of shots, it’s not a film you’ll forget in a manner and that’s not even stopping to think about the film’s subject matter. It’s all very kaleidoscopic, random and unpredictable, but mostly it’s a really clucking weird movie.

French-Argentine provocateur auteur Gaspar Noé is the man responsible for this fluorescent flight of fancy. It follows Oscar, an American drug dealer who was shot and killed in Tokyo, who’s restless spirit embarks on a number of journeys, watching over his friends and sister Linda (Paz de la Huerta), a stripper who’s sleeping with her Japanese boss.

Oscar floats about the city, able to go straight through physical barriers like walls, however, unable to communicate with the world around him. There are also flashbacks from the past, explaining partly why he and his sis became who they are, showing the death of both his parents and then the strong, some might say too close for comfort, bond that the two siblings have shared since.

You’re gripped from the very start of the film just with the opening credits, perhaps the most visually arresting of all time as they pulsate madly against pumping techno music. They certainly help confirm that you’re in for a rollercoaster ride of trippy visuals and experimental music.

It can make for uncomfortable viewing, with Noé as ever looking to shock audiences (the graphic abortion and sex scenes an example), but the fact it’s so beautifully shot and pretty much unlike anything else out there Enter the Void lingers in the mind for a long, long time.

It’s impossible not to include a David Lynch film in a list like this so we’re going to champion one of his earliest and most disturbing works in the form of striking black & white film Eraserhead. Our protagonist is the shock-haired Henry Spencer (the late great Jack Nance), a hapless factory worker on his vacation, who finds out he’s the father of a hideously deformed baby.

Now living with his unhappy girlfriend, the child cries day and night, driving Henry and his girlfriend to near insanity. A state with which the viewer feels familiar after seeing the disturbing visuals that fill the screen at every turn along with a soundscape that seeps into your soul.

It’s little wonder at the time of release Lynch called it “a dream of dark and troubling things“, that may be an understatement. The director went to great lengths to prepare for the shoot. To get ideas for the ‘texture’ of the film he looked at a dead cat’s membranes, hair, and skin, which he said when you “isolate them and consider them abstractly… are totally beautiful.”

Even if you can’t get your head around the waterfall of surrealism, one thing you will get and can probably relate to are the themes. Spencer yearns for escape from a life that’s become a waking fever dream due to the little alien-like baby providing mind-melting misery.

He has fears of intimacy, and indeed relationships, such as that as father and boyfriend. And perhaps his greatest fear of all, seeing his in-laws, who can’t relate to that? 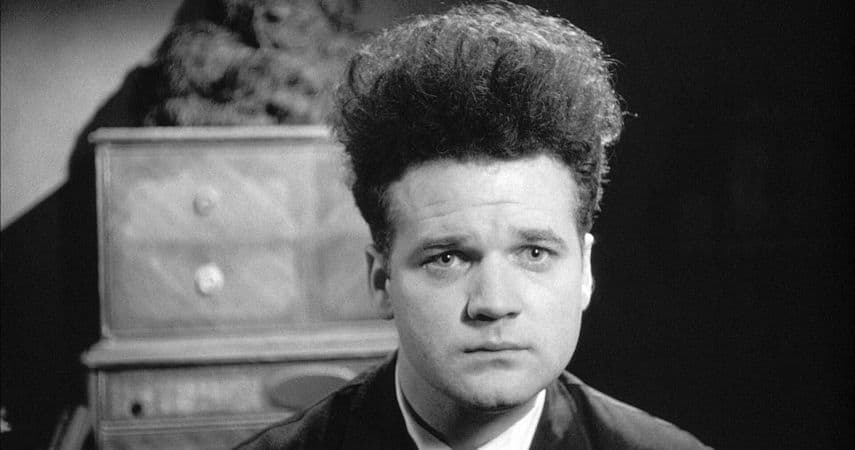 If we had to use but one word to sum up Holy Motors it would probably be challenging. That’s not to say that being challenged isn’t a good thing, it’s character building, it’s a test and something you’re meant to come out of the other side a better person. Definitely, don’t go into this expecting a cohesive plot and a narrative you can follow, you’d be extremely disappointed, but you’d also be missing the point.

The star of the show is the film’s lead Denis Lavant, a shapeshifting, goblin-faced man who puts in not just one incredible performance but at our count eleven, as he takes on different guises. The basic premise sees Levant play Monsieur Oscar, a man driven around Paris in a stretch limousine by Céline his chauffeur.

For some reason (does there have to be one?), Oscar attends a variety of ‘appointments’ around the city, for each one, transforming himself into a different character with all kinds of wigs, make-up, and prosthetics. Among his facades are an assassin, a one-eyed beggar who abducts a supermodel (Eva Mendes) and a dying billionaire.

Don’t try and understand it, do try and enjoy it, it’s a very strange, but very fun ride. 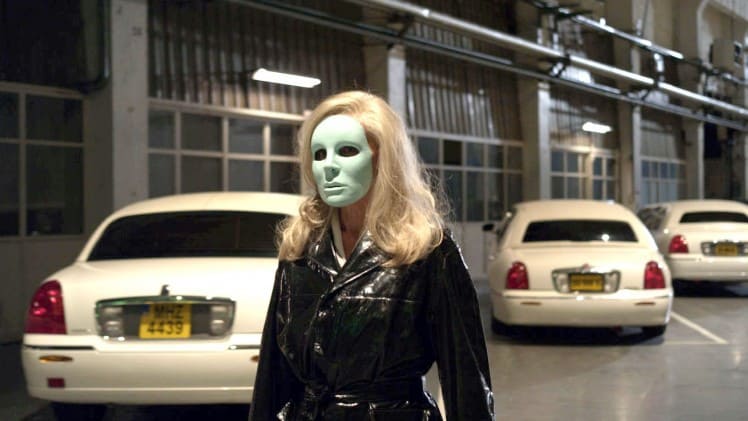 King of surreal Alejandro Jodorowsky is best known for The Holy Mountain which we featured last time out. One of his lesser known titles is Santer Sangre (Holy Blood), which is a Mexican-Italian avant-garde Horror film, that still very much carries on the tradition of all his films being completely bonkers.

Moving between the present and the past the film begins in Mexico, telling the story of a young boy, Fenix, growing up in a circus, the son of a philandering knife thrower and trapeze artist Mother (who is also a cult leader), with his collection of friends, among them a dwarf named Aladin and an elephant.

Over in present-day Fenix resides in a mental institute, from which he escapes to rejoin his now armless (but not harmless) mother to create a new stage act. And when not performing she forces him to enact brutal murders in her name as he literally becomes “her arms”. All pretty normal right? And that’s without really drilling into the detail, freaks and oddities are a constant throughout the film as are the strong visual metaphors which come thick and fast.

Essentially it’s the tale of a boy controlled by his jealous mother who wants to live his own life, which sounds like it could be the plot for a new BBC drama, instead, Santer Sangre is a disturbing, alluring, fantastical trip of a film.