5 of the Most Bizarre Conspiracy Theories Out There

With the upcoming Jason Stathom shark extravaganza MEG releasing it’s first taster, a film that has been talked about for what seems like an eternity, we at least now know the film has finally been made. With the dizzying potential of modern day CGI, a huge budget and the ongoing success of creature features, MEG has swum it out of pre-production and we hope it will be worth the wait.

If like us you’ve managed to sit through Jaws every single time it’s aired in the last thirty years and still would happily watch it again, then you probably share a similar fascination with the deep blue and their most fearsome predator. The thought of a prehistoric Megalodon circling in plain sight certainly gets the juices flowing. But what of the film’s finned predecessors?

We decided to give you the run down of our favourite shark movies, and a few that didn’t quite hit the mark, or rather, they were a million miles off. First here’s a look at that trailer…

A pretty obvious place to start especially given our introduction. The film that transformed everyone’s perspective of a relaxing beach holiday from the master of suspense himself Mr Spielberg. Jaws not only left countless filmgoers scared of every bit of seaweed that touched their leg, it also didn’t do much for the reputation of our favourite apex predators.

Sharks were never seen in the same light again, and while logic insists that sharks aren’t actually interested in chomping down on a puny, boney, human body, the monkey mind says different. It’s the film that brought us Quint, the grizzly seafaring fisherman, surely one of the greatest characters in movie history.

It also changed the cinematographic landscape with Spielberg using jarring jump cuts that ramp up the tension palpably, and of course the now legendary use of that dolly zoom shot, that left us all gasping for breath. The nuanced nature of the background characters both on the beach and around the town, constantly leave a sense of chaos that maintains the tension when seemingly nothing remotely thrilling is occurring.

It’s pure genius, from the dialogue to the soundtrack, the acting and special effects, Jaws would make any great movie list. Oh yeah and the books are pretty darn good too.

This was a bit of a groundbreaker of sorts, a worthy and believable plot, uncomfortable all too realistic cinematography, the very real sense of impending doom, and not a great white shark in sight. In fact that probably made it worse, who knew the little ones could eat you too?

It also gave us something else to be scared off, incorrect head-counting on scuba diving excursions it turns out is a real thing. We know this because Open Water film is based on a true story, well loosely.

Shot on digital video and using real sharks, it makes for is a difficult watch at times, only adding to the horror. The thought of being stranded in the middle of the Ocean with no signs of rescue while being circled by curious sharks is truly the stuff of nightmares.

The small budget belies the huge amount of tension created, and before the horror industry went into overdrive with the gritty found footage genre, there’s still something very disturbing about this home video style film-making.

The Shallows has a pretty solid if not predictable premise. A young medical student Nancy (Blake Lively) grieving from the sudden loss of her mother decides to take a trip to a secluded Mexican beach for a spot of surfing, the very same beach her mother visited when she was pregnant with Nancy a generation earlier.

But a relaxing, contemplative beach vacation it’s not. What unfolds is a nail-biting, tension-filled epic of a survival thriller that packs a punch and a bite! As after hitting the waves with a nasty attack leaves Nancy hanging onto a rock out at sea rather than hanging ten.

It boasts one of the most vicious and relentless on-screen sharks we’ve seen over the years and not to mention the finest seagull acting in cinema history.

This under the radar release from last year is a genuinely good stab at what has so often proved to be an unassailable sub genre. Cage diving is safe as houses, there’s no way even the biggest shark could break through that steel armour, yeah the cage itself is rock solid, it’s the chain that everyone forgets to check on, you don’t want that snapping – oh too late!

The set up here is fairly straightforward, two sisters on holiday in Mexico, go looking for adventure, with one looking to impress her ex by getting some shark selfies in a cage. But after the aforementioned chain incident happens, the pair find themselves as far down on the sea bed as the title suggests.

From here we get a relentless stream of tension, helped partly by the fact that unlike most movies of this ilk, there’s just not one of these monsters roaming the waters, but a pack of razor toothed lovelies waiting to chow down on a couple of tinned treats, and with precious oxygen running low for the sisters, it’s not the most ideal of situations.

Packed full of suspense, for those that haven’t seen it, this is one of the better shark movies.

Another recent production that actually makes a solid fist of things is the third in the Open Water franchise. Three friends decide to do a spot of cage diving as part of an audition tape for a new reality TV show.

There’s lots of home footage exploring the complex relationship between the friends before their big trip. Of course the happy times don’t last, while out on their expedition a huge wave wipes out the boat with all the crew and divers tossed overboard, right in the spot where they’re supposed to be dropping the cage.

What follows is as you’d expect a mental and emotional roller coaster as the three unlucky pals try to survive in infested waters. Truths are shared and friendships fall apart as the sharks pick off the stranded one-by-one.

It doesn’t have what you might call the happiest of endings, but get’s a massive thumbs up for the ride.

The BEST of The WORST

We know many of you will be throwing popcorn at your laptops and smartphones right now, but we’re sorry, or maybe not because we think this is a bit of an eighties classic. What’s not to like? The beautiful Caribbean imagery, Michael Caine being Michael Caine, the original family story revisited?

Okay, the whole shark travelling across countless miles of ocean on a revenge mission is a tad far fetched and the less than silky culmination leaves room for criticism, but all-in-all we’re giving it a tick (in pencil), probably because it reminds us first and foremost of Jaws and the lovable, disheveled Brody. 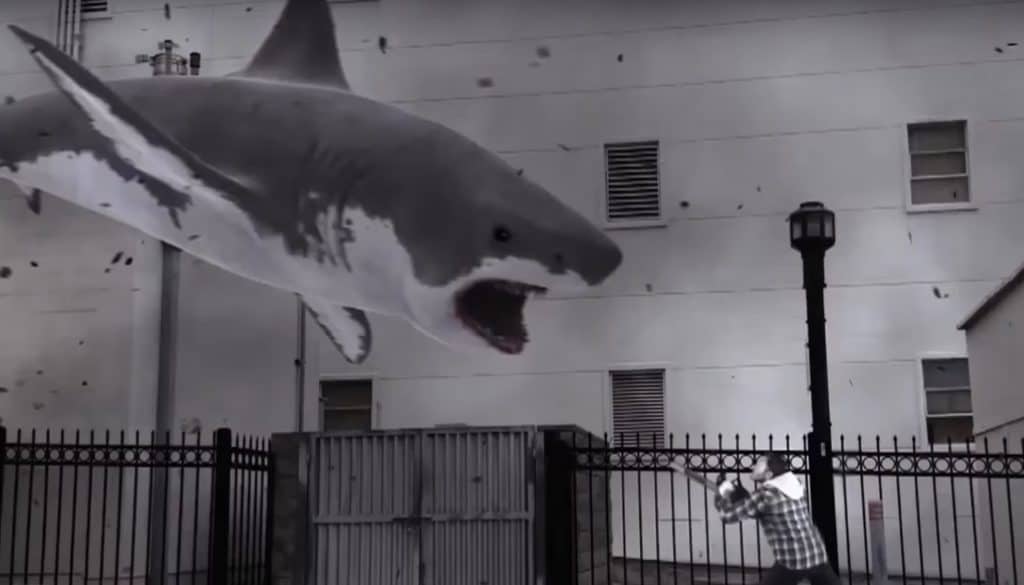 Sharknado is so alarmingly bad, it’s good. Of course there’s the knowing nature of production, this was never meant to be a serious hide behind the sofa number with it’s cheesy action playing out with tongue firmly set inside cheek. After a freak hurricane hits LA, whirling winds scoop up lots of big hungry sharks in water spouts and begin to flood the city with not just water but also these beasts from the deep.

Yes flying sharks, a plot so implausible it’s a wonder what went through the minds of the cast the first time they read the script. What’s even more unfathomable is the fact it spawned a number of sequels.

It’s very much in the cult film bracket now, and if you haven’t seen it but fancy a good laugh and some escapism then give it a go, you won’t get that hour and twenty-five minutes back mind.

A pretty solid cast, a decent premise, some believable CGI, big things were expected of Deep Blues Sea, and compared with a lot of shark movies there’s enough convincing action to satiate. The plot follows the story of a scientist who’s been genetically modifying Mako sharks so that they can develop smarter brains to cure Alzheimer’s (because we need smarter sharks!).

And with the Mako being the fastest of the shark family, it maybe offers credence to some of the jolting effects. A huge storm causes chaos and as a rescue helicopter crashes into the facility this underwater labyrinth starts to flood, cue sharkmageddon as the finned monsters wreak havoc on their captors.

One of the film’s main flaws despite the sloppy direction on display is it’s mixture of CGI and animatronics, it just doesn’t gel well, continuity is also a serious issue with the same sharks changing in size between shots. At least one positive mention must be given to LL Cool J’s role as a religious chef and token “I told you so” guy.

In other news, Deep Blue Sea 2 has finally been released (basically the same film with a much smaller budget and a B-list cast) here’s a sneak peak if you can bear it…

Jaws 3 in terms of quality is essentially The Room of shark films. It has few redeemable features to it. Much of this is down to the fact the film was built around the promise of being a spectacular 3-D production that would send the greatest of whites flooding into our cinemas. This did not happen, in fact if ever a case was to be made for the mis-use of 3-D technology, this would be exhibit-A.

The film tends to shoehorn in 3-D set pieces and let everything fall in place around them, which doesn’t make for the best viewing experience.

Yet the worst crime in the film before any Poundland effects might be it’s script. The hokey dialogue only compounds the fact you are not watching a good film. The ‘plot’ here sees workers at a sea-life style park try to capture and keep a young great white that’s entered the facility. This turns out to be a bit of a mistake when a huge 35-foot mummy shark turns up looking for her kid and its captors.

Even a solid cast in Dennis Quaid and Louis Gossett Jr. can’t save this floater. At the time it reached new depths of awful. 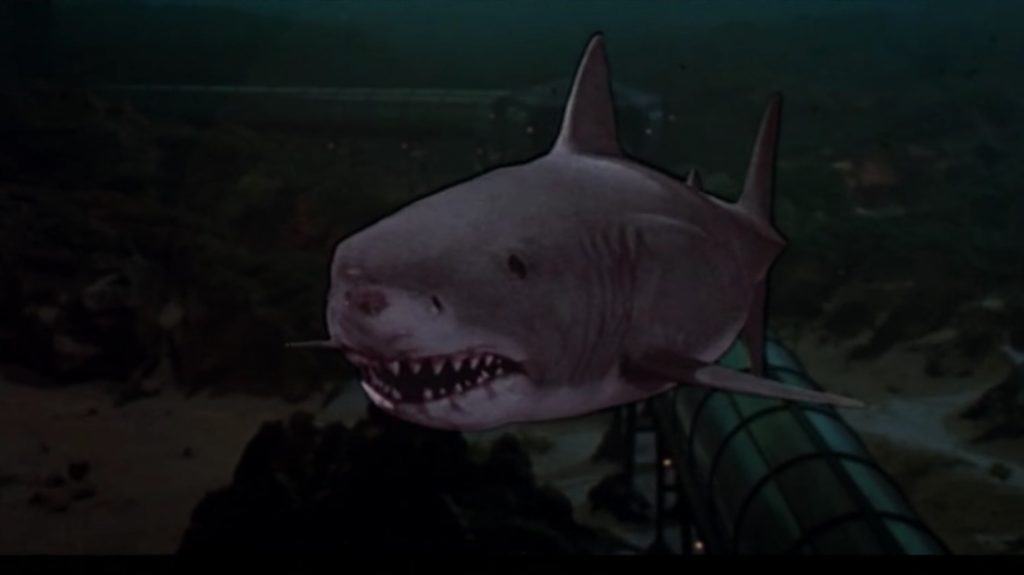 B-movie king Casper Van Dien heads up the cast of this dreadful movie, his name being an automatic red-flag on quality. He plays a marine biologist who heads to a South African fishing village where there’s been a spate of attacks by sharks, one of which that’s left his best friend dead. What follows is a cliche-filled, by-the-numbers movie that fails to induce much terror with its stock-footage sharks and only the briefest and cheapest of thrills to go around.

One saving grace is that it features Ghostbusters star Ernie Hudson, but we doubt it’s the work he’d like to be remembered by. The film was followed by a few straight to DVD sequels, one seeing John Barrowman fighting off a Megalodon, something no one should ever have to witness. Shark Attack is up there, or should we say down there with the worst shark movies of all time.

According to IMDb this is officially the worst movie of all time, which has probably made you all rush to find a copy. Awful effects, acting that’s so bad it would require some talent to pull off. There’s really not much else to say. Why don’t you take a look at the trailer…

What are your favourite shark movies? Let us know in the comments.