A Letter From LA

Everything comes back around, life is like a record player on a continual loop playing through the hits, some might sound tired at times, but you can be assured their day will come again. Much like the halcyon days of 90s Britain, remembered for Britpop, combat trousers, Noels House Party, oh and era-defining films like Trainspotting.

Well, decades later the gang are back together, choosing life in the sequel no one thought would actually happen, and if that’s not enough there’s currently a monumentally edgy adaptation of the book playing out on the London stage.

Some 20 years after Trainspotting exploded onto the cinema screen as the seminal film that defined the 90’s with it’s visceral, hilarious characters and immortal dialogue, Renton, Sick Boy, Spud and Begbie reappear once again this month in the long awaited sequel Trainspotting 2.

In fact, considering Ewan McGregor has been consistently disappointing for nearly last two decades, there is certainly a warm anticipation for Robert Carlyle’s return as the terrifying, glass wielding, ‘don’t-fuck-with-me’, Glasgow psycho Begbie, Johnny Lee Miller as the once handsome and charismatic Sick Boy and Ewen Bremner as the comical, speed taking Spud.

In fact, you’ve got to hope that all of these established actors would only agree to return to such a landmark set of characters if the script was nearly as good as the first, so there’s a lot riding on the film. From an examination of the trailer it looks like we could be in for another roller-coaster ride.

Trainspotting 2 is released on January 27th. 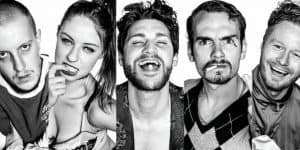 Following in the footsteps of the original film, the most dangerous, visceral and hilarious fringe play on the circuit at the moment is ‘Trainspotting Live’, the live theatrical version of film and book at the Vaults Theatre, right under Waterloo station in London.

With the audience crammed onto low tier terraces inside the small, cavern like theatre, the mind boggling performances of the smack-induced actors are more real than you could ever imagine, with the cast regularly spitting beer into the audience, grabbing and humiliating girls and guys alike, dry humping their heads and then delivering some of the most forthright full frontal nudity you’ll ever see on the stage, shocked, you will be! On the night The MALESTROM attended, some people were so offended they actually left. We couldn’t stop laughing though.

Not only are the performances stunningly brilliant, but the translation of the book and film into a stage version lasting an hour and fifteen minutes is borderline genius. In fact, when the play ended we could have sat there and watched it for another hour, it’s that good. The only reason that ‘Trainspotting Live’ hasn’t been propelled into the West End is simply because it’s too dangerous, too real, too challenging and more authentic than the artificial artefacts that inhabit most modern theatre.

‘Trainspotting Live’ is only running until Sunday Jan 15th if you can make it, but here’s hoping for an extended run and a bigger, wider release in the near future.