“This is How I Die” – Brett Archibald: Lost at Sea

If you haven’t caught any dreaded of the dreaded lurgy going round this bleak mid-Winter odds are at the very least you’ll know someone that’s been grounded with something nasty. The main problem why most of us go down at the mere thought of a germ is a weak immune system, generally created through poor diet.

There are exceptions to the rule of course but it holds true this is generally the case. The MALESTROM is on hand to let you know the best foods and supplements to put into your body that will have any poorly people feeling as right as rain again in no time, and all without a trip to the docs.

Before we get on to supplements lets focus on what foods and herbs to consume to bulletproof that immune system.

Plenty of organic raw foods such as Raw garlic. Garlic fights infections with it’s strong anti-viral, anti-bacterial properties, it lowers blood pressure and even helps keep cholesterol healthy. Take two whole cloves daily, either put it into your food or chop into bits and swallow down whole, don’t chew.

Ginger – An antioxidant, anti-inflammatory and helps prevent viruses. Stick some in your stir-fry or blitz a piece up in your blender with a banana, a handful of spinach half, a teaspoon of cinnamon and a good glug of almond milk to make an immune-boosting smoothie.

Yoghurt – The probiotic cultures in yoghurt are good for that gut, using the healthy bacteria in it to combat germs. Make sure it’s a yoghurt with live and active cultures.

Broccoli – Is a top source of Vitamin C and has anti-inflammatory properties. Steam it ideally to help keep those vits locked in.

Cinnamon – Another good all-rounder, cinnamon lowers blood sugar, so great for diabetics and helps fight off infections. Put a generous sprinkle on your porridge in the morning.

Almonds – A good source of healthy fats, and Contains Vita E which is vital for a strong immune system. Much has been proven about the humble almond’s ability to fight off viruses. Eat a couple of handfuls a day.

Citrus – A top source of Vit C needed to fight off pesky bacteria. Oranges, lemons, limes & grapefruit are all packed with it.

Tumeric – Full of Zinc, Iron, B Vits & Manganese. The active ingredient in Tumeric is Curcumin which is anti-bacterial, an anti-oxidant and it helps in detoxifying the body. It also boasts anti-inflammatory properties.

Shiitake Mushrooms – They might not have these in your corner shop but most good supermarkets will stock these fantastic fungi. Full of immune-boosting benefits.

Spirulina – A great ‘Superfood’ that’s packed with protein (great for Vegans) and amino acids. It’s an antioxidant, enhancing that immunity and it helps build red blood cells, and that can only be a good thing.

We realise to a degree saying don’t consume the above in the modern world we live in is basically like saying don’t eat at all. Most foods these days contain some or even all of these things. Given that, it’s just a case as being as careful as possible with what you put into your body and by going organic where you can. 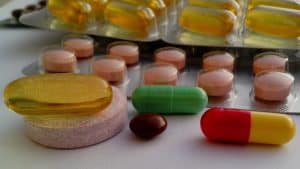 Obviously, if you have a fantastic healthy diet you shouldn’t need to supplement it massively but realistically we all have deficiencies in different areas. Here are some good resources to call upon.

Vitamin C – A strong antiviral and antioxidant. It’s a must-have when taken down by cold or flu. Take 1000-2000 mg per day when you get ill to shorten that sickness time.

Zinc – The perfect bedfellow to Vit C. Helps to fight infection and again reduce the duration of illness. Take around 40mg a day if you don’t get enough in your diet.

Oil Of Oregano – This wonder oil has been used for centuries to treat various ailments, but we’ll just concentrate on what it can do for our immune systems.

It contains the compounds carvacrol and thymol which have anti-bacterial & anti-fungal properties. It’s also an antioxidant and anti-inflammatory and many natural health practitioners say that this oil can be just as potent an antibiotic as any prescription pills handed over the counter.

Apple Cider Vinegar – Taking apple cider vinegar balances the body’s ph levels making it more alkaline. Viruses like acidity, therefore, the more alkaline we are the less damage the germs can do. Buy the organic raw type and take 2 teaspoons in a glass of water twice a day.

Vit D3 – Often referred to as ‘the sunshine vitamin’ as this is the best way for the body to absorb it. Of course residents of sunshine shy countries like the UK can often be deficient so it makes sense to top up the levels with foods that include it like cheese and fatty fish, or in supplement form. 2000 iu per day in capsule form is a good start for most.

Echinacea – A plant-based supplement that supports the immune system. Especially beneficial if you need help fast. It also helps ward of any lurking illness. Best taken when feeling the first signs of an illness coming on.

We’re not telling you to implement all of these things, but if you can introduce some parts of the diet and supplement suggestions into your life you will feel a difference. We’re not saying you’ll never get ill again, but it’ll definitely reduce the duration you’ll be stuck in bed feeling sorry for yourself.

Obviously these things will help most if you can get your diet and lifestyle properly in order. Popping tons of supplements without living a life that includes exercise and a hefty dose of moderation won’t benefit you massively, but if you put all the elements together you’re going to find yourself with an immune system that Superman himself would envy. Get on it and become a better you.