Brexit Latest: A Whiff of Compromise? Or Defiance?

Sixteen years ago The Darkness were rocking the country with their album Permission to Land, which contained the falsetto smash that was ‘I Beleive in a Thing Called Love’. The following year the group won three Brit awards including best album and their unique brand of glam rock led by charismatic frontman Justin Hawkins was creating worldwide waves.

But after their second LP didn’t perform and their leading man checked into rehab, it spelled what seemed to be the end for the band when they amicably went their separate ways. But after reforming six years later, the band, although maybe flying slightly under the musical radar saw their records chart consistently well, with 2017 album, Pinewood Smile, reaching the top ten.

Today marks the release of The Darkness’ sixth offering, Easter is Cancelled. It’s a concept album rightly creating a buzz with its diverse mix of styles and genres, all of which conjure up a mini rock opera reminiscent of the likes of Queen’s A Night at the Opera. The group themselves have described it as a “quasi-sci-fi magnum opus.”

The album went straight in at No.1 on the iTunes Rock Chart, and No.3 on the iTunes album chart with their latest single ‘Heart Explodes’ getting heavy airplay on the radio.

The album sleeve of Easter is Cancelled has raised some eyebrows with its depiction of an alternate superhero-esque Jesus Christ on the cross, who’s visage looks suspiciously like Hawkins himself. It’s been banned on some streaming platforms. The idea behind it is of a universe where Jesus didn’t die, but rather took the fight to the Romans. The idea was born from The Darkness chatting about the multiverse theory.

On the subject of the album’s title track, frontman Justin Hawkins said,

“Rufus and Dan came up with this AC/DC boogie thing, except with all these weird, progressive time changes. Lyrically, it’s one of the multiverse ones. You can’t be angry about a multiverse. It makes everything more manageable. You have to be comforted by the fact that there’s a reality somewhere it isn’t all shit. Conversely, when everything is going right, there’s a universe where it isn’t, and you should be grateful.”

Check out the video for the album’s title track HERE.

Easter is Cancelled certainly contains a bit of something for everyone. There are heavy riffs and indulgent solos that will keep long term fans of the group more than satisfied. Whereas we also get the softer more tender moments, some chanting and how can we not mention a song about a deck chair. Bonkers? You betcha. But it’s great to see these once lauded lads more than back on track with a ten-song collection that could see them hit those dizzy heights again.

The Darkness will be playing Easter Is Cancelled in full, alongside a set of their greatest hits, on their upcoming headline tour. They’ll play 19-dates across the UK starting in November, and the shows promise to be incredibly special with the performances hopefully reflecting the grand scope of the new LP.

On listening to this new album from these true rock and roll survivors, it should be well worth every penny of the ticket price.

Buy your copy of Easter is Cancelled HERE. And get tickets for The Darkness’ upcoming tour HERE 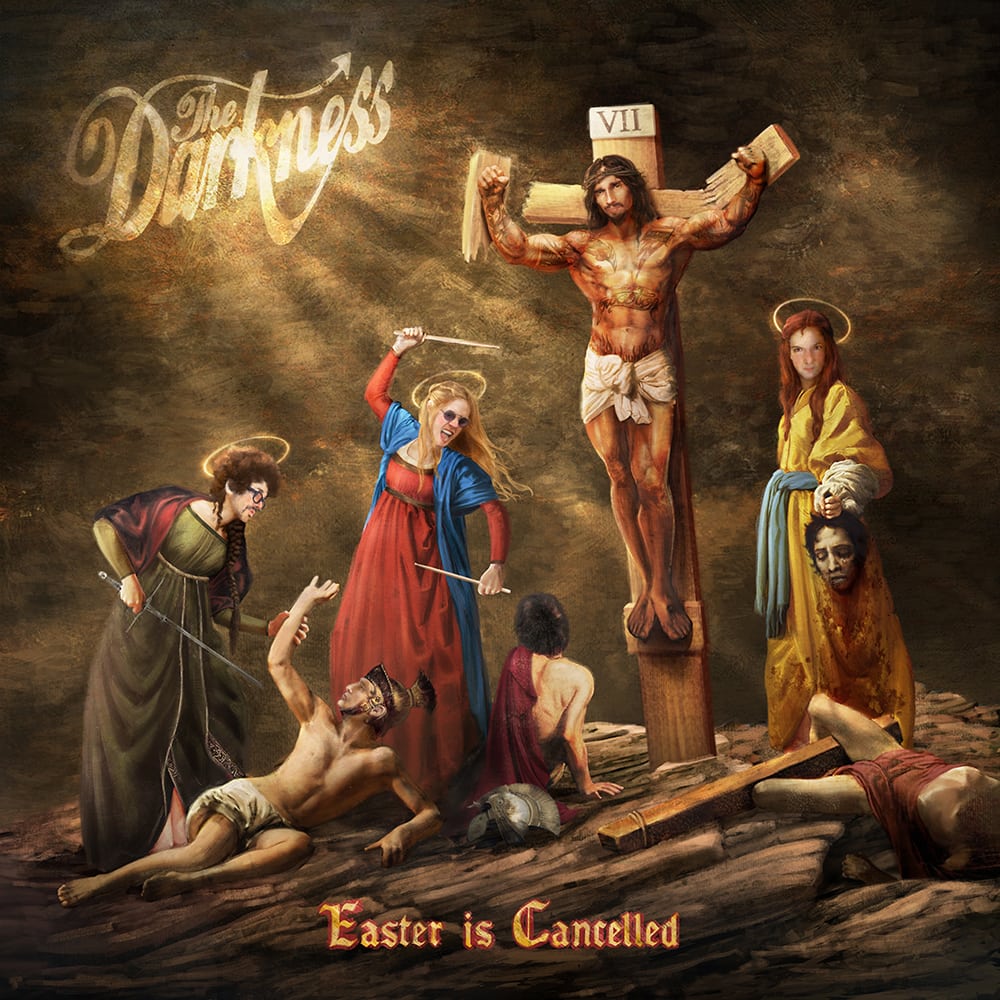