What is the Meaning of Life?

So it’s that time of the year when America comes to a complete standstill, Donald Trump will probably enjoy the first day in the last three months when he’s not the most talked about person in the US however don’t hold us to that. It is, of course, Super Bowl LI or 51 if that’s more satisfying.

Not everyone here at The MALESTROM is a fan of the NFL, but for one of us it’s a pre-eminent part of the global sporting calendar, up there with the FA Cup Final, the Six Nations which also takes centre stage this weekend and of course all the other major events that us sporting fanatics hold in high regard from Wimbledon to The Masters and all cricket and athletic occasions in between.

It’s a sporting event that used to seem so alien, but the growing financial rewards on offer in the Premier League and the increasing influence of the major sporting TV networks look more familiar than ever before.

It’s typically American, it’s over the top, full of pomp and hyperbole – there are celebrities by the dozen, fireworks, tears, and a build up so arduous you’d be forgiven this side of the pond for giving up, going to bed and not sticking around for the first kick.

But… it’s worth the wait. It’s not conjecture to suggest that this is one of the most competitive sporting events on the planet. In the UK there are some detractors who infer that it’s more spectacle than sport, that the game drags on, the use of helmets and padding makes these boys compared to our rugby men, but make no mistake this is one of the most competitive, physical sports, where tactics, statistics the minutiae and significance of every blade of grass on the pitch become of the most paramount importance and decision making takes on a meaning rarely seen in other more considered fast flowing sports.

It will see the Atlanta Falcons take on the daunting task of defeating the New England Patriots in a game that will be shown in over 170 countries across the globe. Last year’s showstopper fetched a whopping 116 million American viewers alone and estimates state that over £1billion chicken wings will be consumed during the course of the game.

Add to that the 33o million gallons of beer that will be drunk and the resulting 7 million people that won’t make it into work on Monday, for the uninitiated you might get a slightly clearer picture of what we’re dealing with here. With all that in mind here are seven things you should know if you’re tempted to face the early hours and enjoy this spectacle of spectacles. 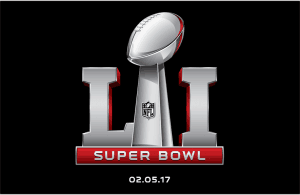 7, Half-time extravaganza – Ok let’s get this out the way first, the least exciting part of the Super Bowl where the pitch turns into a music festival and hundreds of people appear on the turf – with a 30 second half time advertising slot costing upwards of $4 million it’s not hard to see why the Gaga’s, Swift’s, Perry’s and Beyoncé’s would run over hot coals for this gig.

However more often than not the fast turnaround coupled with technical issues and wardrobe malfunctions makes for a bottomless pit of nothingness – maybe this is a tad unfair, it certainly sells lots of papers the following day but if you’re in the UK and Monday mornings alarm clock is closing in on you, half-time in itself is a major inconvenience.

6, The teams – This Super Bowl will see the New England Patriots go head to head with the Atlanta Falcons. The Patriots will be looking to secure their 5th Super Bowl whereas victory for the Falcons would represent their first success. The Patriots have the edge in terms of experience having featured regularly on the big occasion in recent years.

Super Bowl week has a build like no other with constant press engagements, interviews and appearances a new experience for these Falcon players but water off a ducks back to a Patriots squad that’s been there, seen it, done it. Will this give them the edge?

5, The quarterback question – At 39 years of age Tom Brady shows no signs of diminishing powers, in fact, he’s as pivotal as ever. The opportunity to win his fifth Super Bowl while sticking a finger up to the authority’s who handed him a four-game suspension earlier in the season for his role in deflategate is a major motivation.

He’ll be fired up for this and the pressure won’t be an issue, he usually comes up with the answers and he’ll certainly play a big part in who is victorious on Sunday.

Facing off against Brady in what is set to be a straight shootout for the season MVP is Matty ‘Ice’ Ryan. He’s had an unbelievable year where records have tumbled and Atlanta have become recognised as the most potent attacking force in the NFL. Ryan leads the way in all scoring categories and the Falcon’s have broken the season’s points record. He showed in the play-offs he can handle the big game occasion. It’s going to take one last monumental effort from Ryan to secure Atlanta a first Lombardi trophy.

4, Offence vs Defence – The tale of the tape, as mentioned this will be the most intriguing aspect of Sunday’s showdown. The Atlanta Falcons have put together the most varied and exciting attacking game in the NFL. With 13 different touchdown scorers this year they really underlined their growing reputation in the play offs putting 36 points on the board against Seattle before destroying the Green Bay Packers 44-21.

However, they’ll need to be at their absolute best this weekend if they’re to beat a Patriots team that has the meanest defence in the NFL, the perfect subplot. On average opposition teams score less than a meagre seventeen points per game against the Patriots, can they replicate this against a fast and exciting Falcons?

3, The Stadium – The 2017 Super Bowl will take place at the home of the Houston Texans at their NRG Stadium. The stadium has a retractable roof and weather permitting is likely to be open. With a seating capacity of 71, 795 expect it to be packed to the rafters. Interesting side note, the last and only time this stadium hosted the Super Bowl was in 2004, the winners – the New England Patriots.

2, What time is kick off and where can you watch it – In the UK kick off is scheduled for 11.30pm, with 60 minutes game time you may be surprised that it’s unlikely you’ll see a trophy presented until well after 3 am. BBC1 have live coverage as do Sky Sports, we’d recommend going with the BBC where the excellent tag team of ex-pros Osi Umenyiora and Jason Bell will keep you entertained amidst the numerous stoppages while offering relevant insight for any novice viewers.

1, Who’ll win – The head and most experts agree says that The New England Patriots will walk away victors and reclaim the trophy they last won in 2015. However in true underdog fashion, we have to go with the Falcons, this would be their first Super Bowl victory, it wouldn’t be a huge upset but an upset all the same.