With the news that Scottish Celtic captain Scott Brown is set to retire from international football, and his most recent performance against Aberdeen underlying his never say die, old-school approach to the game (see clip below).

Not to mention the fact he’s become something of a social media star, due to an image that circulated of him taking a leisurely stroll through St Petersburg in a short sleeve t-shirt despite the blisteringly cold -11 degree temperature.

We thought it high time we took a look at some of the genuinely hard men to have made a crust playing the beautiful game in Britain. Of course in more recent memory the likes of Roy Keane, Stuart Pearce and the uncompromising disorderly Duncan Ferguson spring to mind, along with Vinnie Jones, who revelled in his dirty demeanour.

But while those guys and Brown himself can take it as well as dish it out, they might have only got small change had they come up against some of these old school, genuinely tough football hard men. 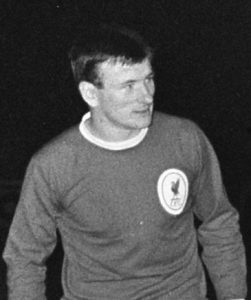 The ‘Anfield Iron’ was adored by the Kop, and rightly so, he was one of their own, growing up a stone’s throw from the famous stadium. Tough uncompromising footballers don’t come much tougher or more uncompromising. The man Bill Shankly once claimed could start a riot in a graveyard, was, despite being regarded as the toughest tackler around, an outstanding footballer in his own right.

A member of Liverpool’s first European Cup-winning side, he also won 4 league titles. However, at a time when the league was littered with fearsome characters, he was top dog. He once gave Jimmy Greaves a food menu for the local hospital before a game against Tottenham.

Another man cut from a similar cloth Jack Charlton once said,

“Tommy Smith was easily the hardest player I faced. I ran into him once and he knocked every ounce of breath out of me. I tried to get up and look like he hadn’t hurt me, but he had.”

When Tommy Smith was born he drove his Mum home from the hospital.

Billy Whitehurst was a genuinely hard man, let alone footballer. Playing for ten different clubs throughout his career, defenders used to have nightmares about playing the big man. So much so Alan Hansen claimed he used to check the fixtures at the beginning of the season to see when he’d have to come up against the fearsome Billy Whitehurst.

He’s rumoured to have given Vinnie Jones a good hiding when they were teammates at Sheffield United, and while openly admitting to many fights in bars and pubs across the land, the stories of him knocking out bouncers and opposition fans are too many to mention, he also reportedly supplemented his then modest income by taking on the local travellers in bare-knuckle brawls.

Billy Whitehurst was so hard, he once went skydiving and the parachute failed to open, he took it back the next day for a refund.

Graeme Souness versus say Roy Keane would certainly have been a matchup worth paying huge money to see. Souness himself a complete midfielder and incredibly gifted talent was equally accustomed with the dark arts as he was switching play with 40-yard diagonals. So much so when he wasn’t dominating the opposition with his skill and majesty he was well, kicking ten bells of s***e out of them.

In the semi-final of the European Cup first leg at Anfield in 1984, Souness had had enough of the niggling tackles and kicks of Dinamo Bucharest’s star man Movila and promptly broke his jaw with a right cross that went unnoticed by the referee. Teammates and opposition will all tell you, he was a player you wanted on your team.

Graeme Souness was so hard he once kicked a man in the soul. 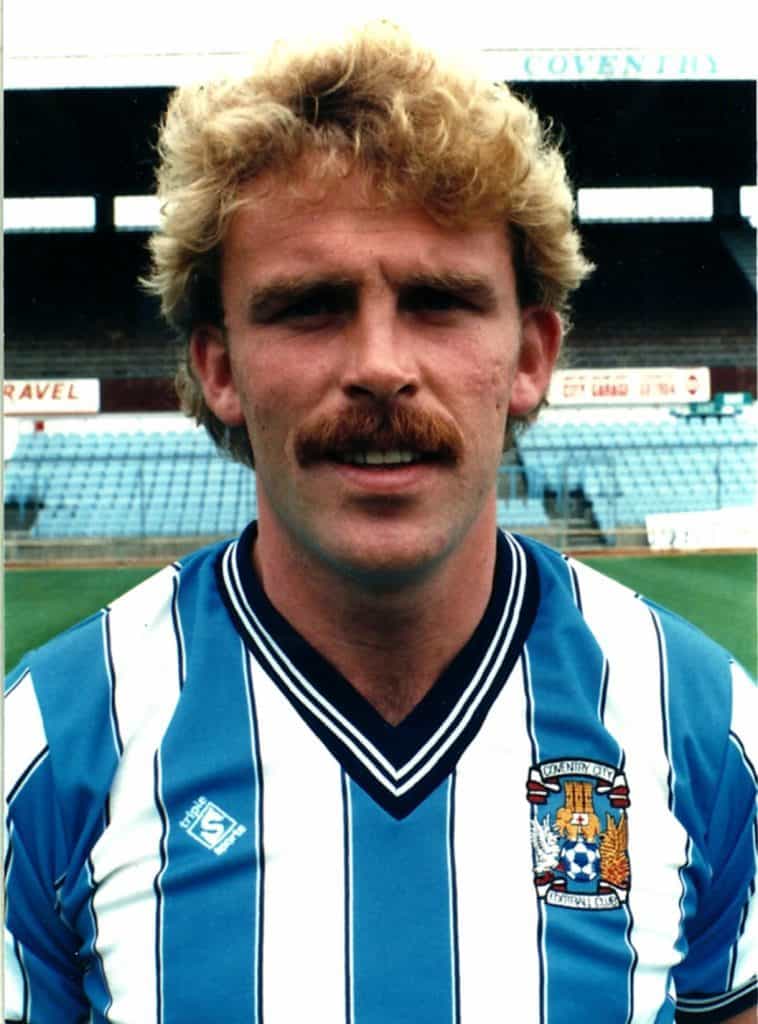 Former Coventry City and Newcastle United legend Brian Kilcline wouldn’t have looked out of place in a Royal Rumble with his blonde flowing locks and a moustache to rival any of the 80s WWF tough nuts. Kilcline’s heart on the sleeve approach was the kind all home fans worship. Ever the eccentric he led a colourful life away from the pitch and even lived on a houseboat for a time during his spell at Swindon.

When he signed for Newcastle, his heroic performances saved the club from relegation, just before the birth of the now famous ‘entertainers’, for that reason alone Kevin Keegan called him the most important signing he ever made for the club.

Known as ‘Killer’ he led Coventry to FA Cup triumph in 1987, hobbling up the famous steps to collect the trophy despite a nasty injury caused by the boot of Gary Mabbutt, which later turned out to be a blood clot. Definitely, a dude you’d want to have a pint with and listen to his old war stories.

Brian Kilcline doesn’t go to sleep, he waits in a dark room. 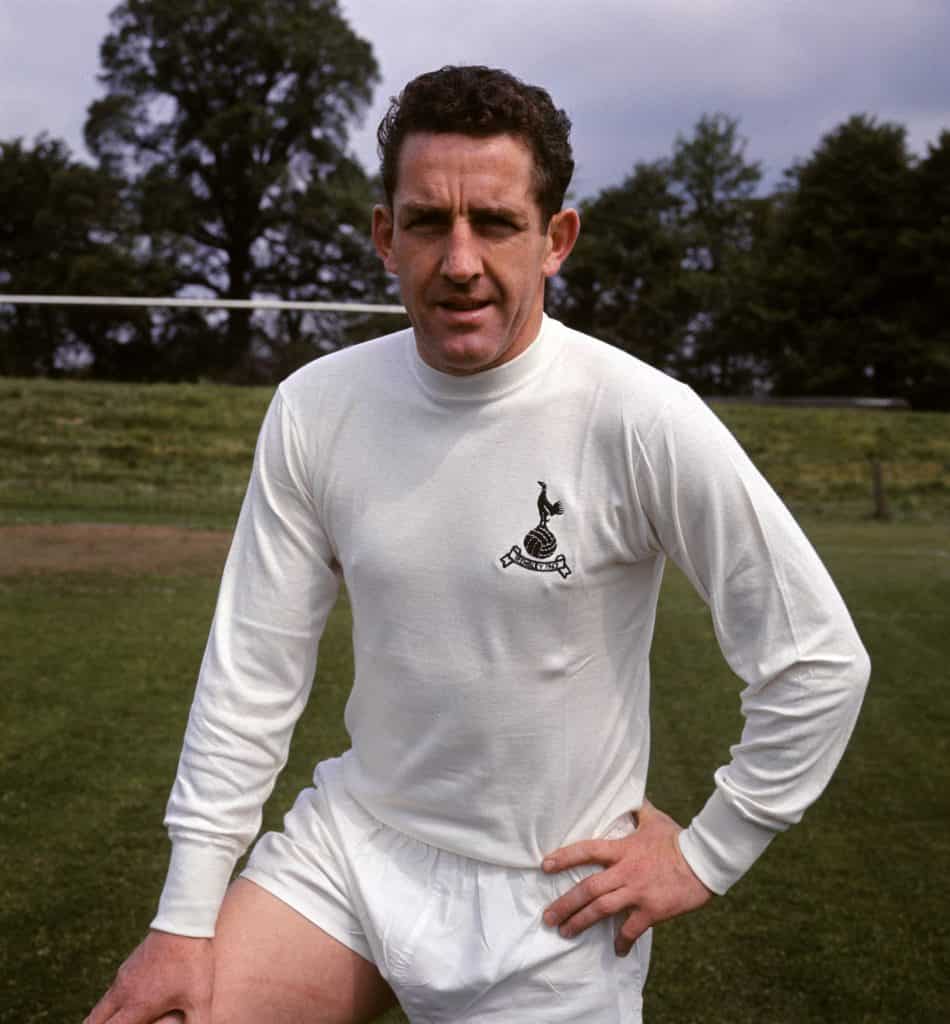 One of the original football hard men and like so many of the tough guys of yesteryear he was also an outstanding player. Such was his physical presence you could be forgiven for thinking Mackay was six foot plus, but in actual fact, he was a more diminutive 5″7′.

Combative doesn’t really sum him up, but given he’s up there as possibly the greatest player in Tottenham’s history, he was also the hardest, as another from the rogue’s gallery, ten stone of barbed wire Billy Bremner found out in that now iconic image. Mackay would go onto lament that photograph, claiming it made him look like a bully, and he didn’t like bullies!

“The hardest man I have ever played against – and certainly the bravest”. – George Best

Dave Mackay once had an arm wrestle with Superman, the loser had to wear his undies on the outside of his pants.

For a guy with no teeth, Joe ‘Jaws’ Jordan had some serious bite. The powerhouse centre-forward who counts Leeds, Manchester United and AC Milan as former employees, was the kind of physical presence up top that defined the era.

Making his mark in the Don Revie led all-conquering Leeds team of the late sixties and seventies, Jordan gained a reputation as a man not to be messed with, which when you consider he could count Norman Hunter and Billy Bremner as teammates tells you all you need to know.

Age certainly didn’t mellow big Joe as his confrontation with another so-called hard man, fiery Italian Gennaro Gattuso illustrated. Jordan even handed his glasses to one of the substitutes at the end of the match, as he showed modern footballers the proper way to react to a head-butt.

Joe Jordan was so tough he once beat a brick wall in a penalty shootout. 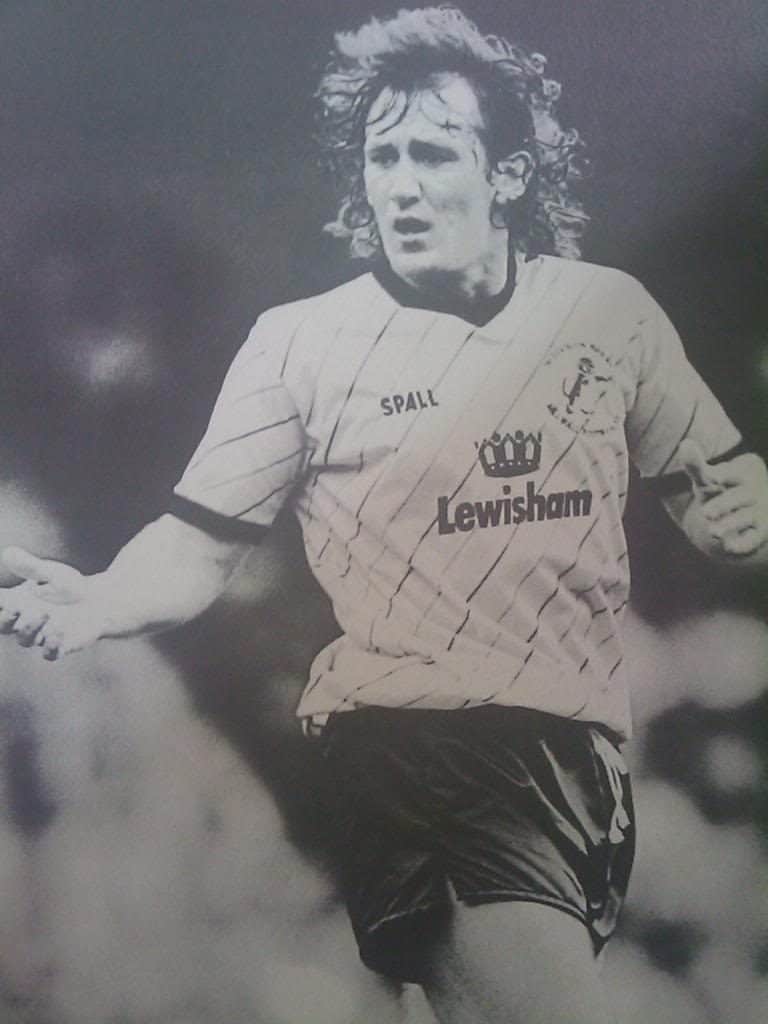 The man nicknamed Terry ‘Warlock’ by the Millwall faithful had a fearsome reputation as a tough tackling, no-nonsense, kick anything above grass height type of player. Another who sported long curly locks, the haircut of choice for football hard men of the time, he harnessed his notoriety in both the lower leagues and at a spell with Rangers, where he picked up bookings like a kid grabbing candy in an unmanned sweetshop.

A fearless enforcer he was a cult hero at every club he turned out for. Imagine squaring off against a Rangers team featuring, Hurlock, Butcher, Gough and Hateley with a certain Graeme Souness prowling the touchline, doesn’t bear thinking about.

“Some of us [Millwall players] were playfully goading Terry about what he was going to do to Vinnie Jones in the upcoming fixture with Wimbledon. Without saying a word, he got up from the table and walked to the entrance of the pub and ripped the door off its hinges.” – Tony Cascarino

Terry Hurlock could curdle milk with a stare.

The well-travelled journeyman Mick Harford was your traditional target man, never afraid to put his head where modern day footballers wouldn’t dare. A giant of a bloke, he spent his career going into battle with some of the best centre-halves in the business from Hansen and Bruce to McGrath and Keown and did they know they’d been in a game!

He had a decent goalscoring record and might have been a Premier League winner had Alex Ferguson followed up on his interest in signing him. Recalling his battles with another nomadic player of the time Big Sam Allardyce himself, who left Harford with a serious wound on his lip and a trip to hospital Mick said,

“(The next time we played) I just tried to hurt him, to be honest – I went in two-footed and threw elbows until I caught him once on the forehead and there was a little trickle of blood. That was probably when I was at my most vindictive on the football pitch.”

He once took umbrage with some Watford players for their overly enthusiastic celebrations (see below). Hartford didn’t actually consider himself a hard man, enough said.

Mick Harford looked and played like he was chiseled out of stone.

Of course, there were many more football hard men from decades past, the likes of Hunter, Harris, Butcher, and Stiles. Who was the hardest player you ever saw? Let us know in the comments below…