Surfing comrades unite and celebrate the life of a true great and one of the most influential men the sea has ever met. His 94 years were littered with such significant accomplishments that the surfing planet would never have been the same without. His reach was such that quickly ‘Jack’ became an afterthought and O’Neill a household name. With hope comes desire and after that the universe will give with your sincerest intentions, gentleman Jack of the ocean harnessed these and in turn became a legend.

Surfers come and go, but not many left their mark on the sport like Jack O’Neill, a great man with a great philosophy, “It’s always summer on the inside,” he’s gone but will never be forgotten.

Born in Denver, Colorado on the 27th March 1923, Jack O’Neill had few interests other than those attached to a surfboard and killer waves. He never chased fame and fortune, but through his pioneering achievements in the world of surf fame and fortune certainly found him. Yet even with all the trappings and opening doors his success brought forth, O’Neill remained steadfastly a man of the utmost integrity, concerned more with saving the planet rather than spending his vast wealth. 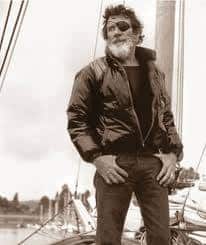 He was credited with helping to invent the wetsuit after originally soaking jumpers in oil to try and repel the cold water back in the 1940s.

Jack was far more than a businessman, he preached that we should live at one with the sea and treat it with the love and fear it deserves, and ultimately respect it.

In later life, he used his great wealth from his surf brand to enhance our respect for the environment by creating O’Neill Sea Odyssey which provides children and students with hands-on lessons in marine biology to further education on the ocean and the environment, something unheard of when Jack first started surfing in the 1930s. He said the program was his proudest achievement.

O’Neill ended up in the surf business after a mishap in the office job he was doing. One day in San Francisco in the early 1950s Jack returned to his desk after a session in the surf.

His sinuses were still filled with water from the ocean, on bending over his desk water gushed from his nose, drenching all his paperwork. This led his boss to give him his marching orders, luckily for the world of surfing.

He opened one of America’s first surf shops out of a garage in 1952 so he could devote himself to what he loved and surf with a few friends, but the brand, which became associated with The Beach Boys (who never actually surfed by the way) saw a meteoric rise. He watched it grow to become the worldwide household name that we know.

In fact to this day O’Neill owns the trademark ‘Surf Shop,’ he just never took legal action against anyone else that ever used the term. He came to be known for sporting his signature eye patch, brought about after losing an eye being hit by a surfboard in 1971, like his pirate style beard it came to be one of his trademarks.

He was a pioneer, adventurer, entrepreneur and environmentalist; attributes not usually associated with someone behind such a successful international business. But like all great pioneers, his success was a by-product of a passion and a sport that will finally be recognised by the Olympics in 2020.

The way of life that Jack promoted was pure and came from the heart and of course his soul, something that The MALESTROM salutes. We’ve dug out this great tribute to him for you to watch: