Monty Panesar remains one of the most popular cricketers this country has ever produced. A world-class spin bowler, he became the first Sikh to play for England and an inspiration for British Asians with his distinctive patka and celebration that filled all our hearts with joy.

He’s seen great highs in the game, not least taking the wicket of the legendary Sachin Tendulkar in his first Test match, and who could forget his role in the miracle of Cardiff in 2009 that led to that year’s momentous Ashes victory.

He also suffered his share of lows, as England imploded during the 2013-14 Ashes series, he began to suffer severe bouts of paranoia and along with an incident off the pitch, his career was in threat of ruin. But as he proved in that 2009 Test match, Monty Panesar is a born fighter, overcoming the adversity and regaining control of his life.

With the release of his book The Full Monty, we spoke to the spin king to talk about his greatest achievements in the game, his struggles with mental health and why he believes he’s still got a lot to give the game of cricket.

The MALESTROM: So who’s your cricketing inspiration? Who got you interested in the sport?

Monty Panesar: I wanted to be a fast bowler like Wasim Akram, who I thought was brilliant in the 1992 World Cup, he bowled really well in that last over at the World Cup and that was my inspiration. There are key moments that happen in cricket that capture the younger generation, and that over in the ’92 World Cup was for me, in my memory as a ten-year-old, made me want to be like Wasim Akram.

TM: From reading your book, one aside seemed you were into another ‘sport’ as a youngster, WWF wrestling…

MP: Yes, WWF wrestling was my big thing. I used to wrestle with my brother, he was Macho Man Randy Savage, I was Hulk Hogan. And he used to beat me, and he was my younger brother.

TM: There’s a lot of film references throughout the book. Are you a big movie fan?

MP: Yeah, I love my movies. I love watching them, It’s a nice past time. They also give you a reflection of how the world is currently.

MP: One of my favourite movies is Training Day. I think Denzil Washington movies have been a huge favourite of mine. I also like Mel Gibson, Nicolas Cage, The Fast and Furious movies. They’re all good.

TM: You’re an inspirational figure for British Asians. it must have been heartening to see the kind of impact you’ve had?

MP: I felt it was nice to be the first Sikh to play for England. I was very grateful for the opportunity that Andrew Flintoff and obviously England gave me. And against India, it’s no easy task.

India is one of the better teams in the world and they had the best batting line up at that time. I remember taking my first Test wicket, Sachin Tendulkar. It’s like beating Tiger Woods in The Masters and you’re making your debut.

TM: Tendulkar, another favourite player of yours. That must have been an incredible moment?

MP: Yes, that was unbelievable. I felt incredible. The feeling of just getting him out and it was like, “Oh my God this is Sachin Tendulkar my first Test wicket”. Off I ran down to point and I had this amazing feeling and I just ran further and further. That’s where the celebrations began to be honest.

As I say I’m very grateful to Andrew Flintoff, to give me this opportunity. If he hadn’t backed me in that first Test match I don’t think I would have taken Sachin Tendulkar as my first wicket and my celebrations would never have existed either.

TM: Your trademark celebration is a massive expression of joy that you don’t often see on the cricket field. It’s very genuine…

MP: Yeah. It’s because of that moment. If my first test wicket was getting number eleven, I don’t think I’d have been quite so ecstatic in my celebrations. Because I never used to celebrate like that when I played First Class cricket.

TM: How did you celebrate then?

MP: If I got a wicket it’d be a high five and that was it. So yes, I’m very lucky and grateful that Andrew Flintoff gave me that chance.

TM: Tell us about that moment you were first selected for England and the confusion on the phone with David Graveney…

MP: I was in Coventry with my other friends from my temple and I got the phone call from David Graveney and he basically said I’d got a trial at Loughborough, we want to see how your bowling is and I really wasn’t sure who David Graveney was at the time. Then he said he was the Chairman of selectors for England and that’s what we want to do.

It took a minute for that to sink in and then I was thinking, “Oh my God, the Chairman of selectors, this is the biggest boss in English cricket and he wants me to go for a trial to see how my bowling is!” I was over the moon. Just ecstatic.

TM: I wanted to talk about the coaches you had throughout your career. Some who players might not have found the easiest to get on with. Kepler Wessels being one at Northamptonshire and Duncan Fletcher for England.

MP: Kepler Wessels was perfectly fine for me at that time. I needed someone to give me direction, discipline, strict instructions and just follow them. So then I didn’t have to think for myself. And at that time, that was perfect. He worked very well for me.

MP: I really enjoyed Duncan Fletcher. He gave me the space to think for myself and I quite liked the way he wouldn’t say too much, he’d just observe. And that really helped my cricket.

TM: Looking at the way you and other cricketers handled issues you had off the field, what Marcus Trescothick went through seemed to have an effect on you, before you went through your own struggles?

MP: I think Marcus Trescothick was very brave to share his story. And it helped a lot of people to talk about their own story. He made it much easier for everyone else to talk about mental health issues in cricket.

Before it was difficult to talk about these things, so I’m very grateful to Marcus Trescothick for the way he opened up and talked about his problems, because it allowed other people to be brave enough and think I can share my story too.

TM: How do you think the ECB handled mental health issues at that time?

MP: I think the ECB and the PCA were brilliant, they give really good awareness on mental health. They provide professional help, they give you awareness of how to tackle these issues. There’s a lot of education behind it. What I find is in the South Asian communities there isn’t that education, there isn’t the help that’s required.

So, I think my story of how I coped with my mental health issues and how I tackled them… all communities have it, not just the South Asian ones, hopefully hearing my story could help those who might be struggling with theirs. I’m not saying mine is the right way, but what worked for me may work for some people.

TM: One of the big low points for you was that 2013-14 Ashes series where England imploded. How did you recover from the paranoia you were feeling at that time?

MP: I remember going to the coffee shop with Greg Matthews, and a friend of his Peter Gilmour, who was a hypnotherapist. We sat there and the first five minutes, I listened to the conversation and then the next forty to forty-five minutes I couldn’t register what conversations they were talking about, what it all meant and all these other things. Which is where I realised there may be something wrong with me.

TM: Everyone will be keen to know how you are now?

MP: I’m 100% back to my full fitness and full physical health. I feel fit, strong and have a huge desire to play professional cricket this year.

TM: You’re currently playing for your local side, is that right?

MP: Yeah, I play for Shenfield cricket club on Saturday’s and I’m training with Northants, so I’m hoping I’m able to get some other opportunities to train with other counties, or play some second team cricket somewhere, because I still feel I have a lot to offer as a bowler and I’m sure I could do a really good job for a team.

TM: With the way the IPL is going and the new 100 ball format arriving over here, I guess you want to be a part of that?

TM: Just looking at your greatest achievements in the game, your Ashes debut springs to mind, but what would you say has been the highlight so far?

MP: Obviously there was that moment in Cardiff where no one thought I would be able to draw the Test match, that was a brilliant moment. I really enjoyed that one, it probably was my finest hour, certainly with the bat.

TM: You started doing a lot of reality TV after stopping playing for a while. Was that a good distraction from the problems you’d been suffering with?

MP: Yes, I love doing all the TV work. Obviously, cricket’s my first goal. But hopefully, after cricket, I can become a pundit or have some kind of media role in cricket and try and become a TV personality.

TM: What about some movie work?

MP: I mean that would be great, but that’s later in down the line, but you never know. Eventually, you do have to think about your second career, so acting, TV, the entertainment world, I think that’s where I’m suited.

TM: Who’s the most talented player you’ve played with or against?

MP: In terms of those I’ve played with probably Jimmy Anderson and Kevin Peterson. And faced I would say Virender Sehwag and maybe Michael Clarke.

TM: All great players. We do like to finish by asking for a piece of wisdom you’ve gleaned from your career?

The Full Monty by Monty Panesar, published by White Owl is out to buy now. 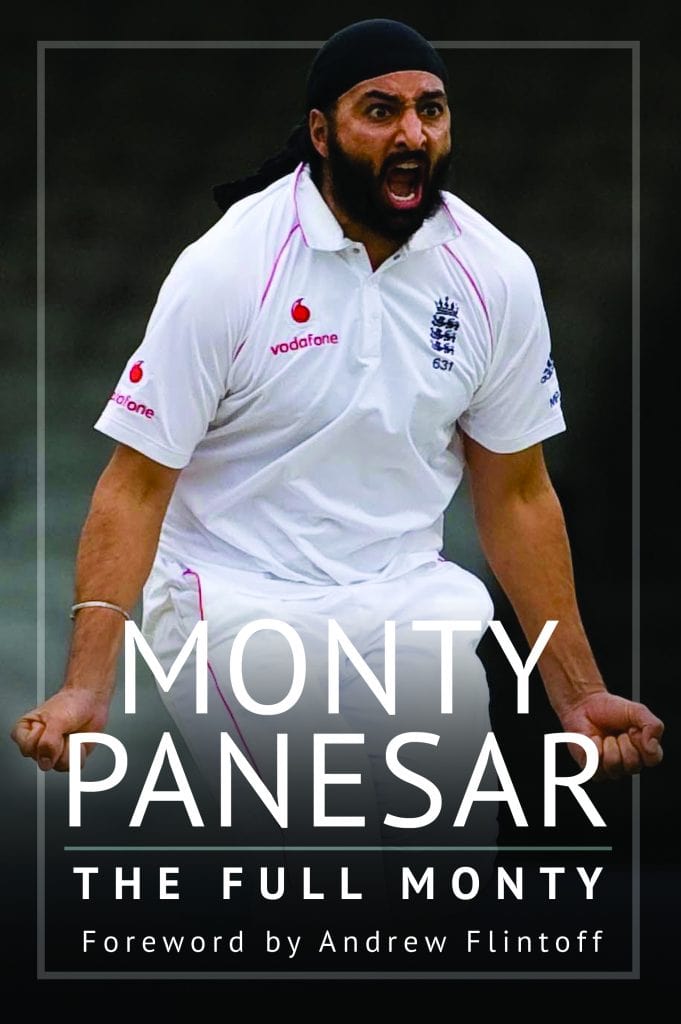