As is so often the case in tragic stories, the protagonist can often become a cult figure, a person who transcends the very achievements he has made. Often times, particularly in the case of musicians who’s tragic death at too young an age, has contributed over time to make them a cult figure.

The stories become embellished by their achievements and talent heightened to mythical status – take Kurt Cobain, John Lennon, Bob Marley or Jimi Hendrix and then throw in Bruce Lee for example. In all of these cases the figures mentioned were at the top of their game, some of the most famous faces on the planet, when their untimely death came to pass.

On the other hand, occasionally there are those who never fulfilled their talent, never made it to the top of their game, failed to achieve anything close to what their supposed talent warranted. In some cases they are barely recognized in the wider consciousness, save a small minority fortunate to have seen them perform.

Here at The MALESTROM, we pride ourselves on being a well-rounded, knowledgeable bunch, particularly when it comes to the world of sport and most significantly football. Which is why there was a degree of surprise when a name and story of footballing prowess landed on our desk.

A tragic story of a man who literally had the world at his feet but for whom success never followed. The man’s name was Robin Friday, delving further into his tale just made all at The MALESTROM HQ scratch their collective heads even harder. Who was this guy? And was he really the greatest that never was? Phone calls were made to some knowledgeable sporting friends, “Robin who?” they exclaimed, “can’t say I’ve ever heard of him.” “He may just have been the greatest footballer you never saw,” came our response.

I can recall my old man a lifelong Preston North End fan, talk of a train journey on the London Underground – two young men on his carriage were deep in animated discussion about great footballers past and present, suddenly one of them came out with, “apparently there was a guy called Tom Finney and he was supposed to have been as good as anyone.”

They were both baffled and unable to let it go, my Dad chipped in and told all he could about a man who was certainly one of the greatest this country has ever had. As generations pass, some of the greats get forgotten; stories can, of course, become embellished and often nostalgia plays its part. Which makes the story of Robin Friday all the more interesting.

Robin Friday was found dead in his flat in Acton, the place where he grew up, at the age of 38, having suffered a heart attack brought about by a suspected heroin overdose. His life was one of debauchery and recklessness, summed up perhaps best by the 1995 single by The Super Furry Animals, celebrating Friday, ‘The Man Don’t Give A F**K’, the artwork of which features a photograph of Friday giving a two-fingered salute to Luton Town goalkeeper Milija Aleksic while playing for Cardiff City.

His early years were troubled ones, at the age of 16, Friday spent 14 months in Feltham Borstal for a number of offences including theft. Friday reportedly drank heavily throughout his early adulthood and also his playing days, he was also known to consume large quantities of drugs including cannabis and LSD. One story tells of Friday’s promise to then Reading manager Charlie Hurley not to drink for 48 hours before a game, however, he did take acid!

If George Best was football’s fifth Beatle then Robin Friday was football’s answer to Motörhead wild man Lemmy. To drill down more into the character of the man, we got in touch with a chap who knows more than most about the man in question, Paolo Hewitt, author of The Greatest Footballer You Never Saw: The Robin Friday Story. We asked him what the catalysts were for Friday’s craziness,

“There were kind of two elements at work, he came from this very hard working class estate in Acton, really tough. Robin’s brother Tony said a very interesting thing to me, ‘it was the sort of place where you either had a giggle or you died,’ and Robin learned to have a giggle and just took that through life, he didn’t care where he was, he could have been playing for England and he’d still be the same.”

“Also the building accident where he fell from the roof onto a spike, which went through his arse, and missed his lung and heart by millimetres … he was back playing football within three months. I often think any tendencies he had then toward not giving a f**k were completely exemplified, as he must have thought how random is life? First thing you know you’re on the roof of a building, the next you’re in a life and death operation. I think he thought live life to the full and that’s how he played his football.”

On the pitch, for those fortunate enough to have witnessed him at a time when there would have been little or no television coverage of a 3rd or 4th tier team, Friday was a ferocious competitor. He joined Reading in 1974 at the age of 21 as they languished in the old fourth division.

Within two years they had gained promotion to the third tier of English football predominantly due to Friday’s prodigious talent. An old school physical centre forward, with an immense work rate, Friday was also said to possess exceptional ball control and dribbling skills, able to beat numerous opposing defenders with ease. Paolo recalls a story from a Reading fan,

“I remember speaking to a royals fan who’d seen him play, I asked him what the best thing he’d seen him do was, and also bear in mind he never used to play with shin pads and in the 70s, pretty daring!”

Friday was also described as having an instinctive footballing brain and vision which by all accounts, talent that should have seen him go on to become a household name and an England international. Which makes it all the more baffling that in total he played a mere 160 first team games for Reading and Cardiff City, scoring an impressive 60 goals – but it’s his 53 goals in 135 appearances for Reading which stands out. Friday left Reading for Cardiff in 1977 having fallen out with his predecessors over wage demands.

On his arrival at Cardiff City train station – to sign his contract, Robin was arrested by police for having an invalid ticket and had to be bailed by then Cardiff manager Jimmy Andrews. His decline was rapid, he regularly went missing for weeks on end and his behaviour became increasingly more erratic, his personal life descended into chaos.

After only 25 appearances in two seasons, Robin Friday had had enough and promptly retired. It is in some ways testament to his precocious talent that despite his off-field antics and unreliable nature, it was he that called time on his career at the age of 25 and not his manager or chairman. 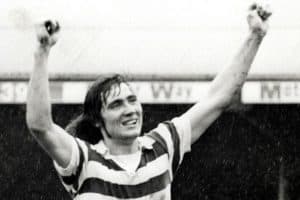 Robin Friday could have been one of the greats, he scored wonder goals, was impossible to get the ball off and possessed a competitive spirit that when channelled appropriately made him unstoppable, of course therein lay the problem.

Reported to have grabbed former England captain Bobby Moore’s testicles in a 3-0 victory over Fulham in which Friday scored two goals in a man of the match performance on his Cardiff debut, having spent the previous night drinking heavily. Further incidents included one featuring then Brighton centre half Mark Lawrenson.

After kicking him in the face during a match and receiving a red card, Friday broke into the Brighton dressing room and evacuated his bowels in Lawrenson’s kit bag. We should also add ‘japes’ like this weren’t a rarity.

On his retirement, Friday returned to Acton where he once again encountered trouble with the law and served a prison sentence on this occasion for impersonating a Police officer and confiscating people’s drugs. His life reached a tragic ending as his demons got the better of him. He has since been voted Reading’s player of the millennium and is truly a cult hero for all who saw him play.

The fact that there is virtually no footage of Friday in his pomp, drifting past full backs and turning lumbering centre halves inside out only adds to his mythical status. His goal against Tranmere Rovers has become the stuff of legend, and first-hand accounts are as equally dramatic as the second and third-hand versions.

Some of you may have been blessed to have seen this enigmatic genius at work, for the rest of us, he’s ‘the greatest footballer you never saw’. We’ll leave the final words on Friday’s lust for life to Paolo …

“The great thing about Robin was he played football like he lived his life, flamboyant, outrageous, kissing defenders at corners, pulling shorts down, grabbing Bobby Moore’s bollocks, he was just full of the joys of life.”

Get a copy of Paolo Hewitt’s book ‘The Greatest Footballer You Never Saw: The Robin Friday Story’ HERE

Did any of you ever see Robin Friday play? If so get in touch in the comments.