The Moment of Truth? Or More Damned Lies?

Sunday league football, the true grassroots of the beautiful game where you can find all aspects of the sport, the good, the bad and sometimes ugly. If Wembley is the mecca of elite English footy, then Hackney Marshes is the amateur equivalent.

One man who’s no stranger to that hallowed turf is Chris Baker, a documentary and portrait photographer from London with a long history in the amateur game. He spent two years documenting football on the marshes creating what is essentially a love letter to the less glamorous side of the sport with his fantastic book Sunday Football.

In it, he perfectly captures the passion, muddy uneven pitches and most importantly the comradery among the players for whom Sunday is definitely not a day of rest. We caught up with Chris to talk about this unique cultural event.

The MALESTROM: What was the motivation for the book?

Chris Baker: It was never supposed to be a book. The plan was to shoot a project on amateur football with the lens facing everywhere but the pitch.

I grew up playing football with friends, junior leagues, county level, trials for professional clubs, eventually ending up back at Sunday League. I knew the comical value of Sunday League sidelines, dressing rooms, pre and post game and wanted to capture that.

It became a book after I started having a conversation with Hoxton Mini Press about their East London series of books. Sunday Football on Hackney Marshes fit perfectly in what they were trying to do around building an identity of what East London visually was and is. 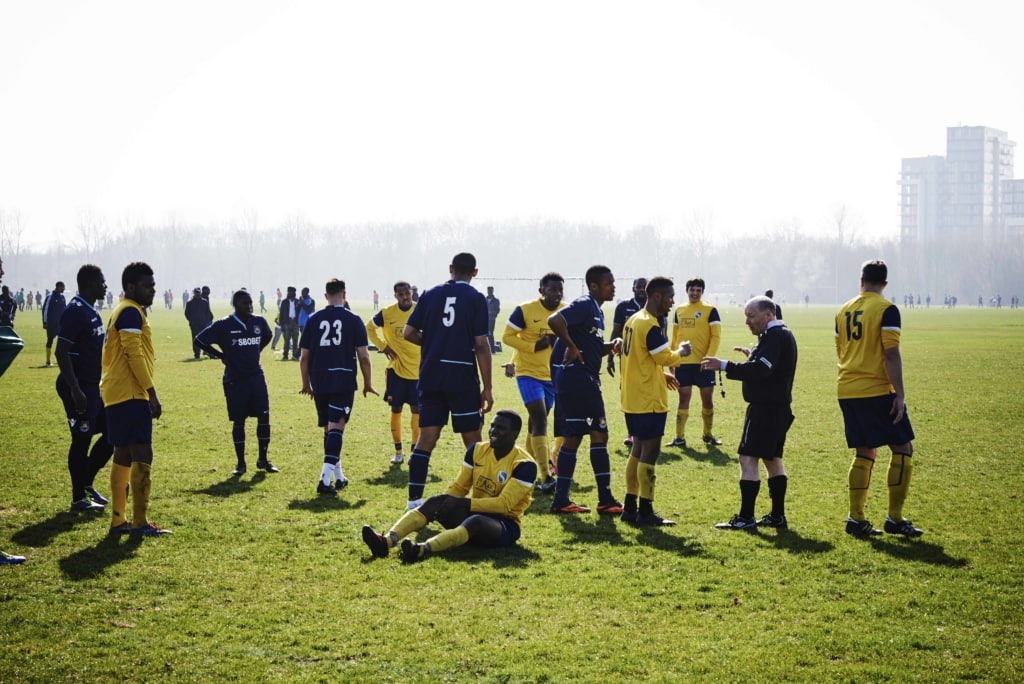 TM: As an outsider what’s the deal with Hackney Marshes and Sunday league football? Is it carnage with so many matches going on?

CB: It’s an incredibly well organised weekly event. There were 120 pitches when it was first built on the rubble of the Blitz back in the ’50s with thousands of people turning up each week.

It’s now down to about 80 pitches with several hundred people turning up. It’s wonderfully British and iconic. I like to think each country has something similar but I’m yet to see or experience it on my travels.

TM: Is there something particular you’re looking for when taking these pictures or is it just being there to capture moments?

CB: I wasn’t looking for anything specific. Because of the thousands of hours I’ve played and been within that environment, I know the characters that exist.

The harassed ref, the mouthy sub, the guy who always turns up late, the striker that refuses to pass up an opportunity for goal (me!) and those people create great moments worthy of being captured so my job was to document and be ready. 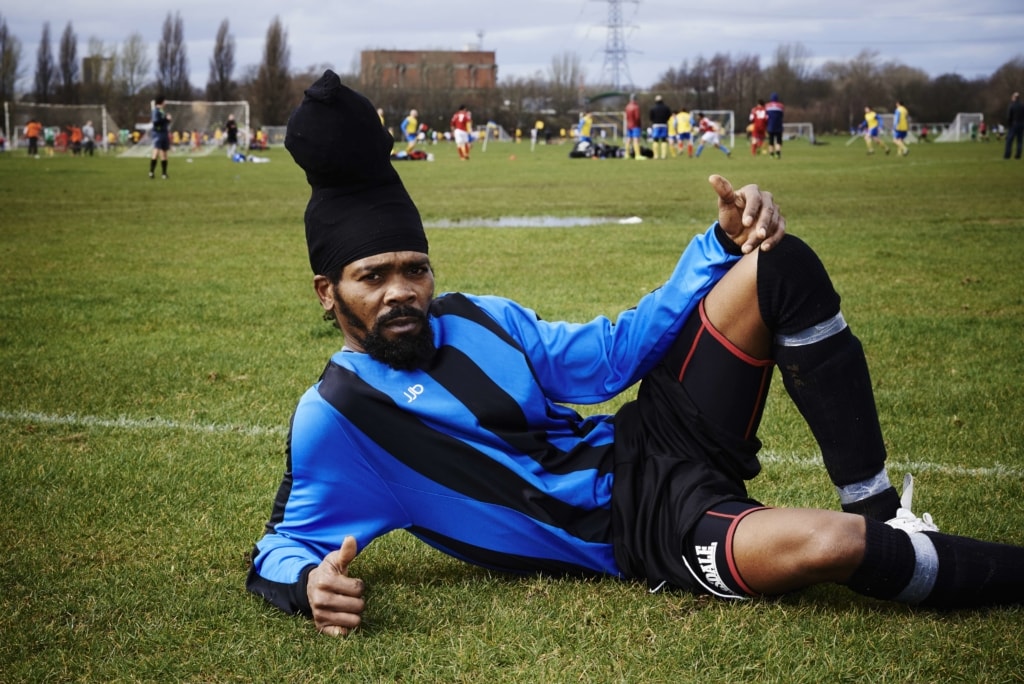 TM: What makes Sunday football such an English past time?

CB: I can only liken it to a mythical event… no one knows how, why or when it started, it just did and now it’s ingrained in English culture.

CB: The book was shot over a period of 2.5 years and in that time, surprisingly little. There were maybe only three fights I saw in that time, a dog off the lead creating havoc before a game, an abandoned game or two caused by an overzealous player giving the ref an earful. ‘It’s not like it was back in my day’, so they say!

TM: We’ve seen a few Sunday league brawls in our time. Did you see any situations where things came to blows?

CB: The one that stands out was after a game where a team had lost only by a few goals, a few words were exchanged between players of that team and suddenly a few fights broke out within the team. It was thankfully over very quickly. 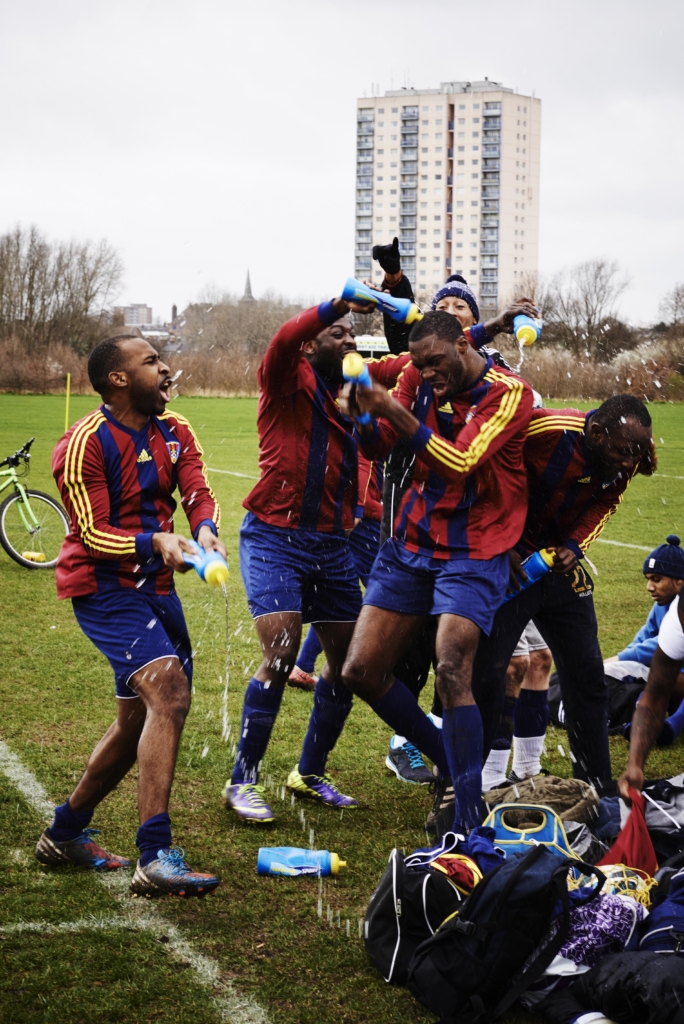 TM: One of your photos shows someone skinning up. There’s a lovely irony of the sport that’s associated with fitness juxtaposed with things that are more detrimental to health. You must have seen a fair bit of that?

CB: Weed seems to be a popular ‘performance enhancer’ at the marshes, trailing in popularity behind the half time ciggie. One of my big realisations was that most people seemed to be using Sunday Football as a way to recreate their childhood.

No problems to think of, just yourself, your mates and a football. In that context, it seems like the odd spliff, cigarette and hangover is a pre-requisite. 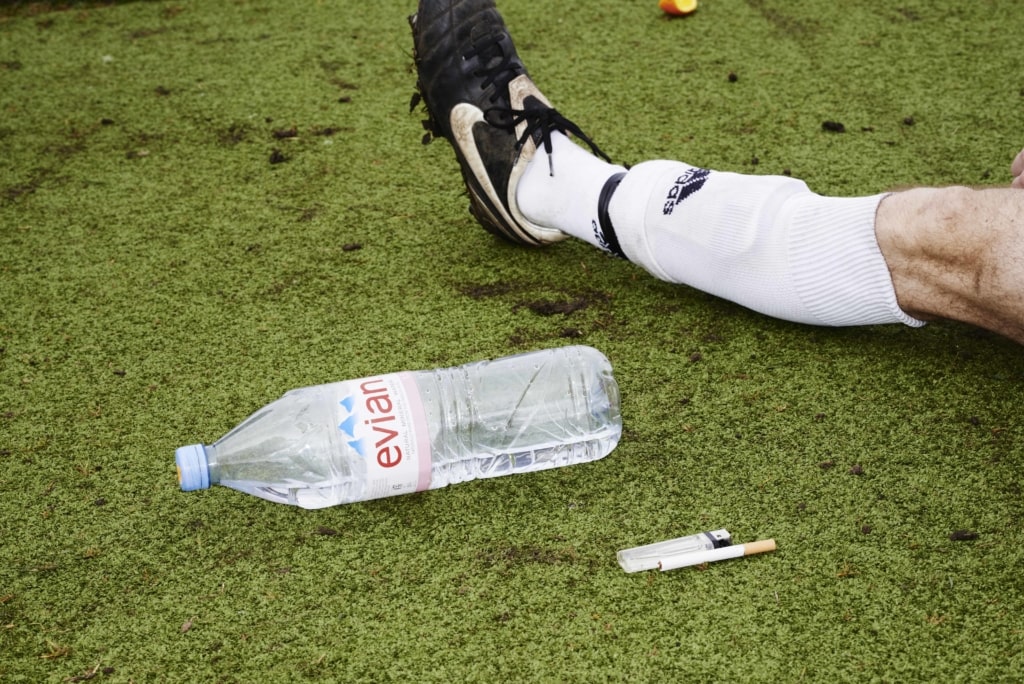 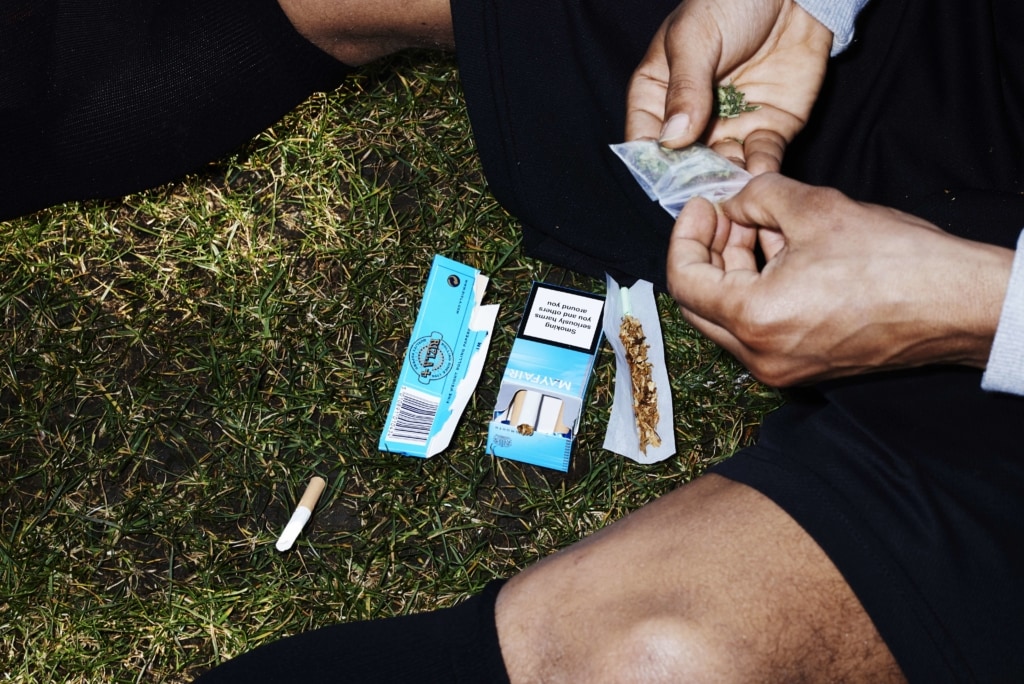 TM: We think of the archetypal Sunday player as a ball playing centre half who marshals the troops and isn’t maybe as good as he thinks. Did you see typical archetypal figures over your time capturing everything?

CB: Ha! You are spot on with that description. Each team had at least one figure that fit a stereotype, but often they would have several and I would see the same characters repeated across teams.

The flashy striker, the stoic centre half, the wise old man of the team who had seen it all, the out of shape guy who really needed a more gentle way of experiencing exercise, the hungover guy who should have stayed in bed… its visual gold to photograph. 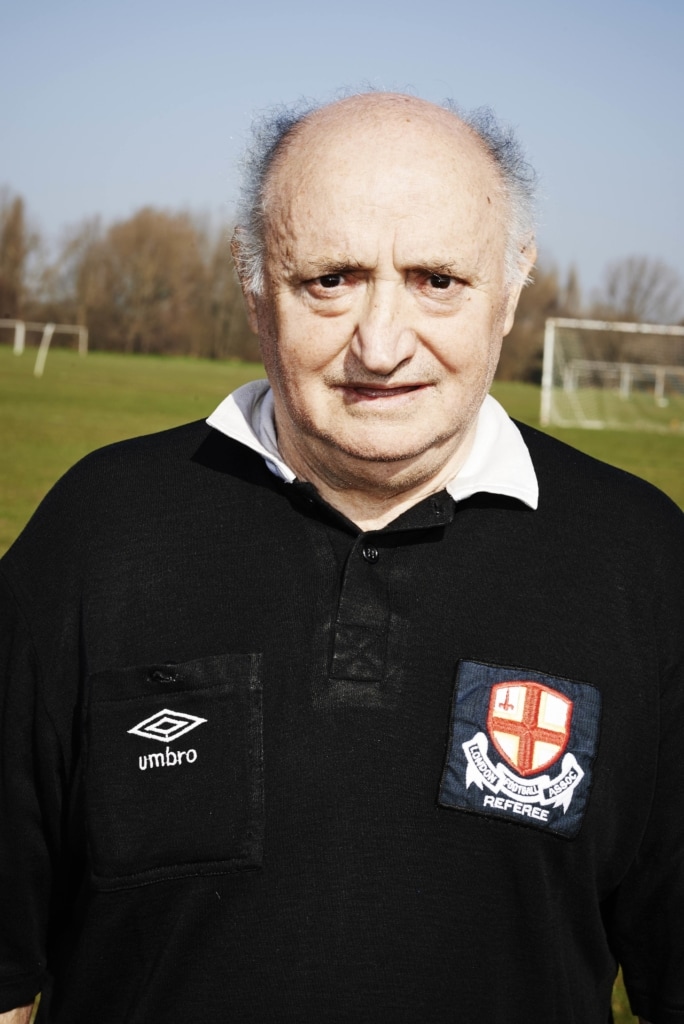 TM: You’ve taken a very striking image of a ref. What possesses them to officiate Sunday league games?

CB: Good question with an honest answer of I have no idea! I think it’s substantially better being a ref now than say 20 years ago, but still!

One ref told me he had only had to abandon 4 games in 400 on the marshes; one for being headbutted, one for being threatened violence after the game had finished and one because a team wouldn’t stop fighting amongst themselves and the final one for some other type of violent conduct, he was happy as could be with that ratio.

TM: What are you trying to capture with your style of photography?

CB: I’m interested in truth and I would suggest that’s why I’m drawn to documentary photography. It very easy with photography to lead the viewer away from what’s really going on, best exemplified with Instagram.

With the Sunday Football photographs, there’s no setup, it was often a few seconds with a player or knowing from experience where to be and when.

TM: How much is the whole occasion about the community? 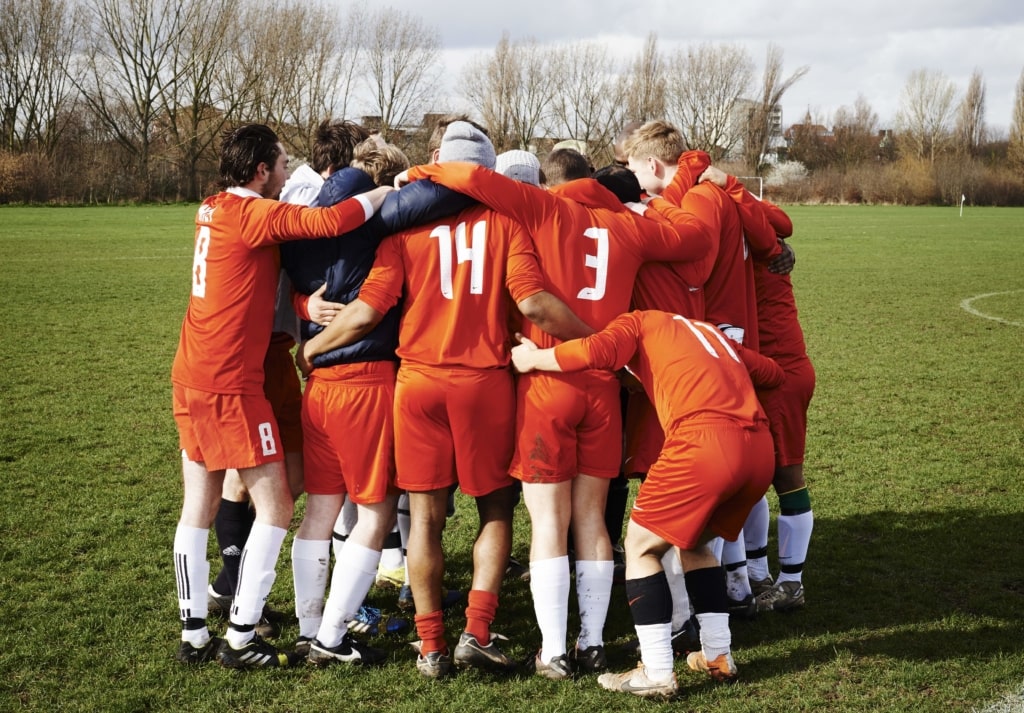 TM: What was the one image that you were most proud of capturing?

CB: There’s so many. There is one if a guy who has just been subbed sitting on the floor with his hat off and topless. That was taken 5 mins into the game, he had been subbed because he was too hungover to play.

There’s a close-up portrait of a player, fag hanging out of his mouth walking back to the changing rooms. There are two guys in blue and white stripe shirts standing next to each other, a council block estate in the background under an overcast sky. 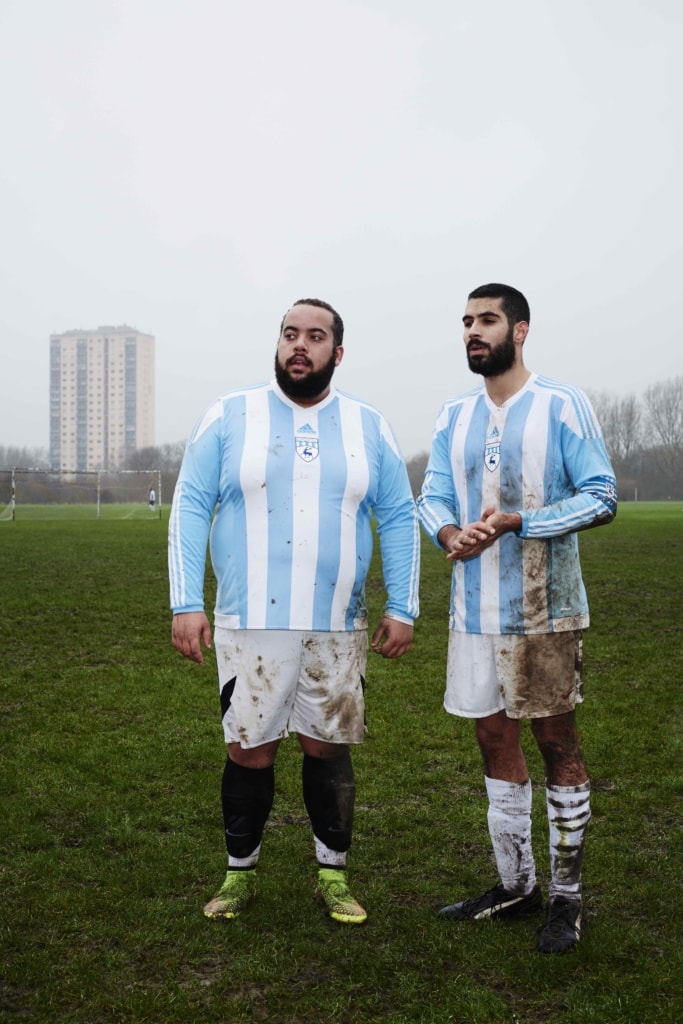 There’s a shot of a guy spraying the back of his knee with PR spray (I still have no idea what it does). All these shots for me show off amateur football and amateur sports in general in all its realness and glory, editing down from thousands of shots into 100’ish was extremely difficult. 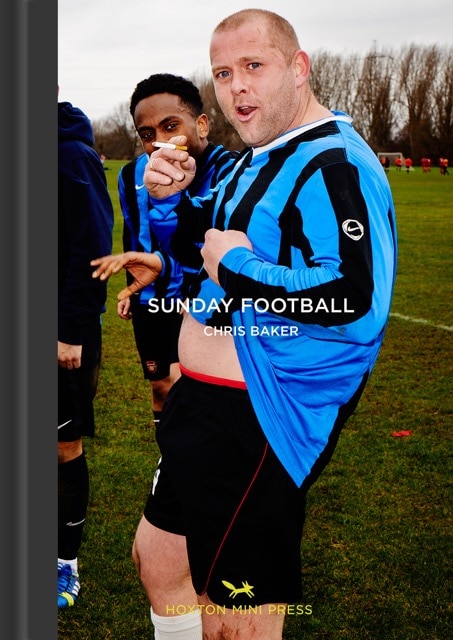