So the Ashes that great sporting contest begins this Thursday when the Aussies do battle with the ‘poms’ in the first test in Brisbane. It’s a mouth-watering prospect, and so far it’s been incidents off the pitch that have been dominating the attention of the world’s media. With one of the fiercest rivalries just on the horizon, we bring you some fascinating Ashes facts and the best in on-pitch sledging from series past.

The first matchup between these two fiercest of rivals took place in Melbourne in 1877. However it was five years later in 1882 that, off the back of Australia’s first win on English soil at the Oval, British newspaper ‘The Sporting Times’ ran English cricket’s obituary stating,

“The body will be cremated and the ashes taken to Australia.”

Hence the beginning of the battle to regain the Ashes. 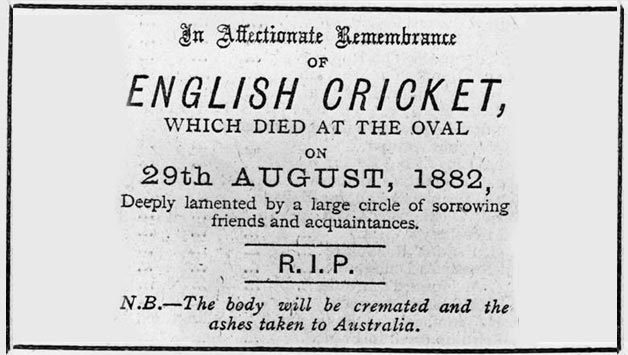 As significant as that moment might have been in a historical context, England actually went onto to win the following 8 Ashes series back to back.

“Don’t bother shutting the gate son, you’ll be back soon.” – Fred Trueman to an Aussie batsman walking out to the wicket.

There have numerous incarnations of the famous urn, however, the current version the Ashes Trophy made in 1998 is presented to the successful team. Interestingly the urn is permanently on display at the MCC Museum at Lord’s, regardless of who is victorious.

“If you turn the bat over there’s instructions on the back.” – Merv Hughes to Graham Hick after playing and missing a few balls.

Remarkably of the 69 Ashes series that have taken place since 1882, England has won 32. Australia? 32, the remaining five, of course, drawn, adding a little extra spice to Joe Root’s first attempt. In terms of test matches, however, Australia has the edge with 130 victories compared to England’s 106.

“Maybe not, but at least I’m the best player in my own family.” – Jimmy’s retort about Mark’s captain and brother Steve Waugh.

The term bodyline used to describe the art of genuinely fast short-pitched deliveries that target the opposing batsmen’s body and head, was first coined in reaction to England’s 1932-33 touring party to Australia, who in premeditation of the illustrious batting skills of Sir Donald Bradman devised a plan to bowl short of a length fast deliveries to nullify their ability to score runs. It caused outrage down under and although a successful ploy, it prompted a swift changing of the laws and back came the Aussies the following series to regain the coveted Ashes, led of course by Mr Bradman.

There are only three England captains to have won the Ashes both home and away Len Hutton, Mike Brearley and Andrew Strauss.

“You’re a f***ing cheat.” – Aussie wicketkeeper Ian Healy to Michael Atherton when he wouldn’t leave the wicket when Australia thought he was out.

The best bowling figures in an Ashes test match belong to James Charles Laker who took 19 wickets for 90 runs off 68 overs in Manchester in 1956 and unsurprisingly became known as ‘Laker’s match’. The highest score accolade belongs to Len Hutton who smashed 364 runs off 847 balls at The Oval in 1938.

“Let’s have you right under Nasser’s (big) nose.” – Ian Healy placing a fielder yards away at cover when Nasser Hussain was batting.

David Boon holds one infamous Ashes record. The Tasmanian batsman reportedly downed 52 beers on the flight to England for the series in 1989. The previous record holder was wicketkeeper Rod Marsh who sank 45 cans.

“How’s your wife and my kids?” – Aussie Rob Marsh to Botham

“The wife’s fine, but the kids are retarded.” – Botham’s response.

The highest run scorer in Ashes history is, of course, Sir Donald Bradman, who hit an astonishing 5,028 runs at an average of 89. Second, on that list is another knight of the realm Sir Jack Hobbs who conjured up 3,636 runs and in scoring his final century against the Aussies, he became the oldest man to do so with his 142 at Melbourne at the age of 46.

“Oi, Tufnell! Can I borrow your brain? I’m building an idiot.” – Aussie spectator shouting out to Phil Tufnell when fielding.

Unsurprisingly it’s Shane Warne who tops the bowling stats with an astonishing 195 wickets that included 4 ten wicket hauls. Few who saw it will ever forget his very first delivery against England when he left Mike Gatting completely stumped pardon the pun with ‘that ball’. Second on that list is aggro Aussie paceman Dennis Lillee, who took 167 wickets against some oftentimes terrified English batsmen. His partnership with Jeff Thomson was a deadly combo.

“I don’t mind this lot chirping at me but you’re just the bus driver.” – Nasser Hussain to Australian opener Justin Langer.

The highest English batting average in Ashes cricket belongs to Eddie Paynter whose record stands at 84.42, having scored 591 runs in 7 matches between 1933-38. Australia’s highest batting average is 102.50 by Albert Edwin Trott having scored 205 runs in 3 matches. Amazingly Trott played for both Australia and England, having taken residency in the UK when he joined Middlesex. He’s also reputedly the only man who has ever hit a ball over the top of the Lord’s pavilion.

“It’s four years since I bowled to you and you haven’t improved.” – Merv Hughes to England batsmen Robin Smith

“Neither have you.” – Smith’s retort after he had smashed Hughes’ next delivery for four.