The Best Craft Beer to Drink This Summer

Usain Bolt begins his quest to become not only the greatest athlete of all time but a name that ranks up there with legends like Muhammed Ali, Michael Jordan and Pele when he lines up for the first round of the IAAF World Championship 100m tomorrow. Another handful of golds would shoot him into the stratosphere of sporting greats.

With the Championships upon us, The MALESTROM decided, being borderline obsessive sprint fans, to take a look at what would be the greatest 100m line-up of all-time 100m.

With some hugely disappointing drug-related occurrences over the years, to say the waters here are a little muddy would be an understatement, however, proceed we shall with a list of contenders of the fastest men ever to run in a straight line, under the hallowed ten-second mark.

There are of course a number of grey areas when compiling a list of the greatest sprinters, with so many of the fastest men of all time having tested positive for banned substances.

For example a now presumably heavily tested and supposedly clean Justin Gatlin is proving himself to be one of the fastest sprinters ever and were it not for Usain Bolt would be a two-time Olympic Gold medallist and possibly two-time World Champion.

There’s also a number of cases of sprinters who ran incredible times on one-off occasions but moreover failed to turn up in major events. It’s also worth considering sprinters like Linford Christie and Frankie Fredericks, who while posting quick times during their careers, are by no means the fastest of all time, however in the big races always turned up.

To look at times alone does not do justice to some of the athletes and the success they achieved during their era, Jesse Owens for example, imagine the times he might have run in the modern era.

Obviously, only nine men make the greatest 100m line-up, so who misses out? The criteria mean we have to take banned athletes into account, so Ben Johnson, Yohan Blake, Asafa Powell, Nesta Carter, Tyson Gay and Tim Montgomery all miss out for their misdemeanours. They have indeed clocked some of the fastest times in the history of the sport, however lengthy bans and a lack of medals sees these guys miss the cut.

Further afield notable mentions have to go to Kim Collins, one of the most consistent performers at the big events, a humble and popular athlete. Leroy Burrell, who for a time looked set to be one of the best, and twice broke the world record, clocking 9.90 in the summer of 1991, however, injuries derailed his hopes of serious medal contention.

Finally Ato Boldon one of the most consistent performers in a long career, he has run some of the fastest times in the history of the sport regularly breaking 9.90 mark.

It’s a controversial and contentious topic, that being said here’s our line-up for the greatest 100m final of all time. 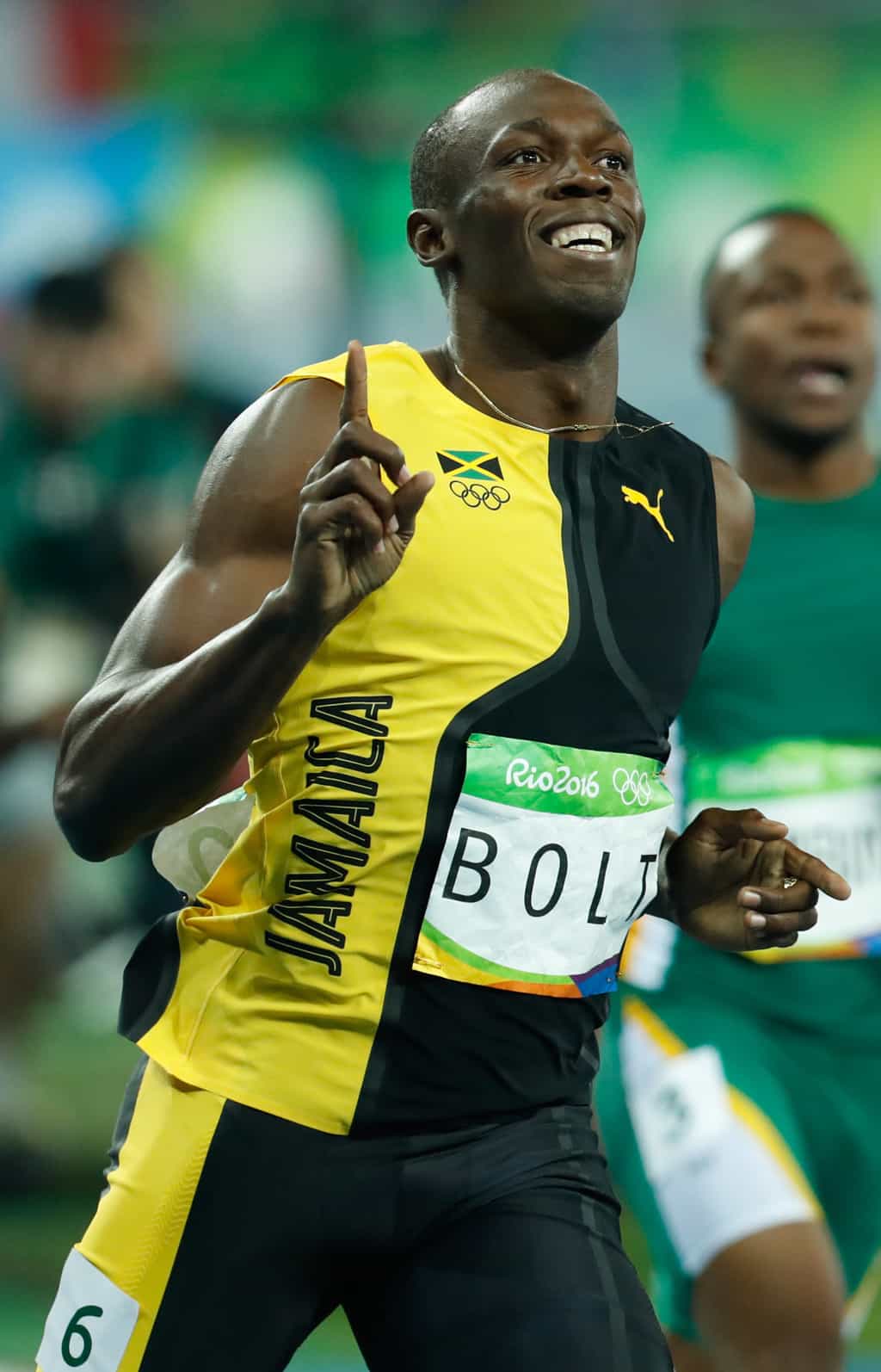 Usain Bolt – Let’s get this one out of the way, the ‘lightning bolt’ is the first name on the list and his extraordinary haul of medals at major championships sets him apart as the greatest athlete of all time. With world records in both the 100m (9.58) and 200m (19.19) beating Michael Johnson’s supposedly unattainable time, there really hasn’t been another sprinter that has captured the public’s imagination like Bolt. It may be a very long time until anyone comes close to his times. 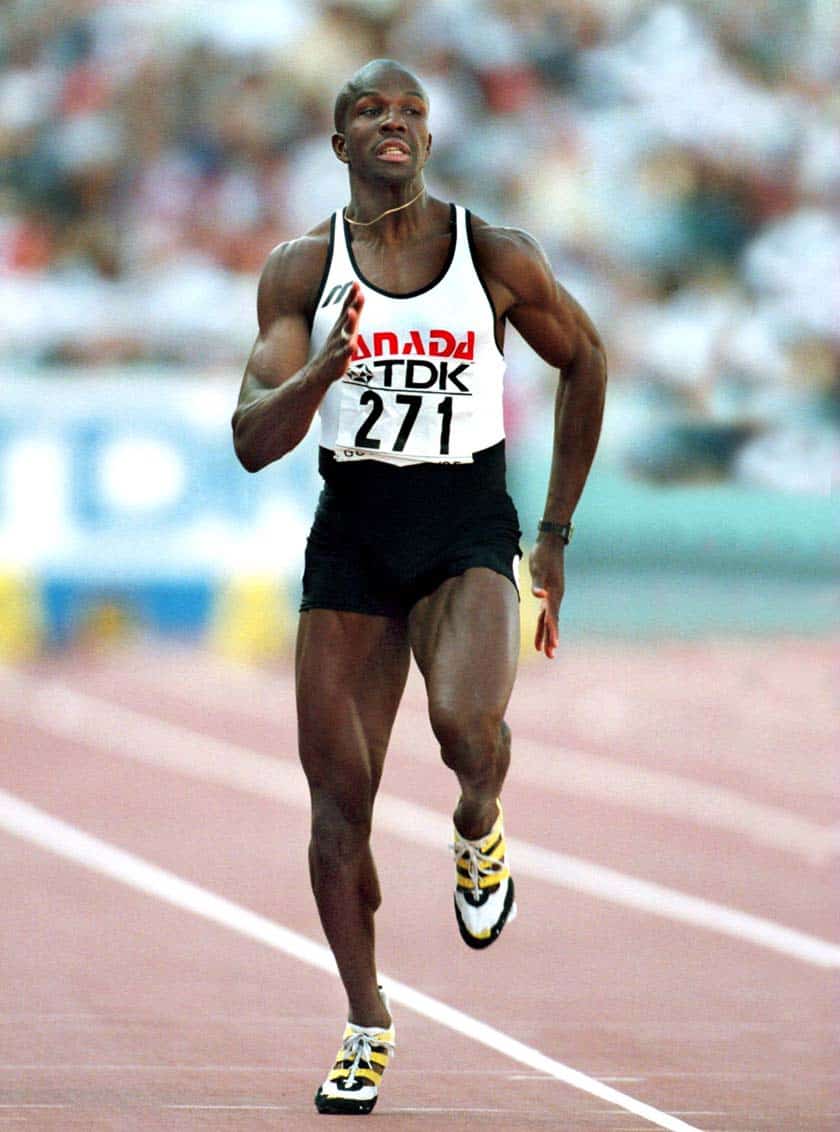 Donovan Bailey – Restored pride in the people of Canada following Ben Johnson’s world record-breaking Gold medal controversy in 1988. Bailey was a dominant force in the mid-nineties and broke the world record when he clocked a time of 9.84 seconds at the Olympic Games in Atlanta. He famously went on to beat Michael Johnson over 150m in 1997, a race to determine who was the fastest man in the world. 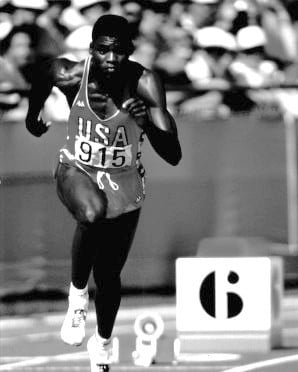 Carl Lewis – Not without controversy himself, Carl Lewis has to be recognised as one the most accomplished athletes of all time. With nine Olympic gold medals and eight World Championship golds, he was a truly gifted athlete who has held world records at the 100m, 200m and the long jump. Incredibly competitive and a serial winner Lewis would surely be looking to medal in this race despite the strong competition. Lewis broke the world record in claiming gold at the 1991 World Championships with a time of 9.86. 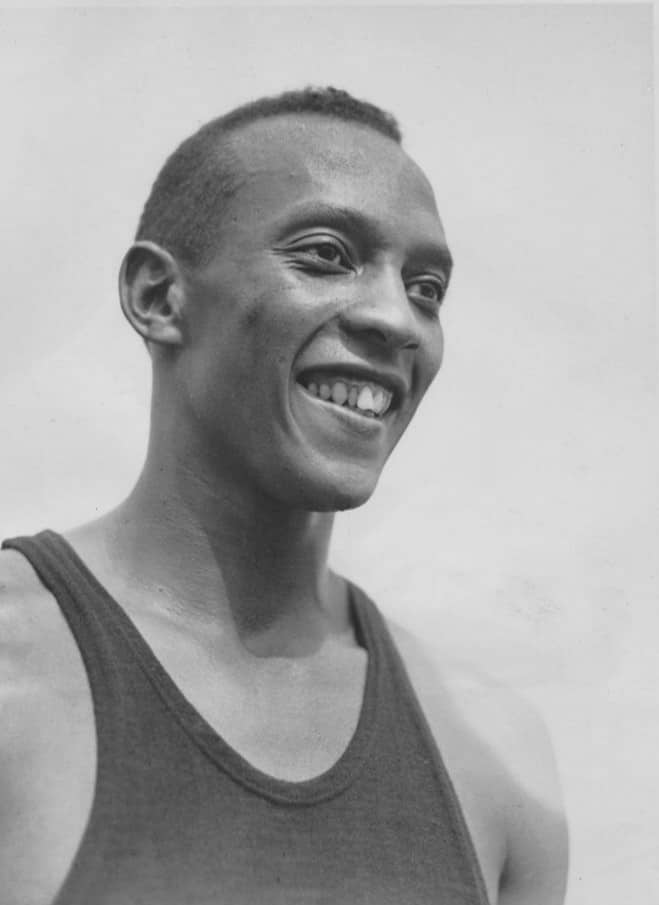 Jesse Owens – It would be impossible to leave out trailblazer Jesse Owens who won four golds at the infamous 1936 Olympics in Berlin, putting pay to Hitler’s Aryan supremacy in the most dazzling and timely fashion. Considering the tracks that Owens ran on in comparison to the speed enhancing modern day versions, and the training and dietary programmes of the modern athlete, he would surely be very competitive in the modern era.

Bob Hayes – Holds the incredible accolade of being the only man to win an Olympic gold medal, and a Super Bowl title with the Dallas Cowboys. Hayes was at one time considered the fastest man on the planet and clocked a world record  10.06 at the 1964 Olympics in Tokyo, he achieved this feat from Lane 1 making it all the more remarkable. Incidentally, he had to borrow a pair of spikes for the race having left his own behind. At the same games, his final leg in the 4×1 relay was clocked at somewhere around the 8.8-second mark, still the fastest ever. 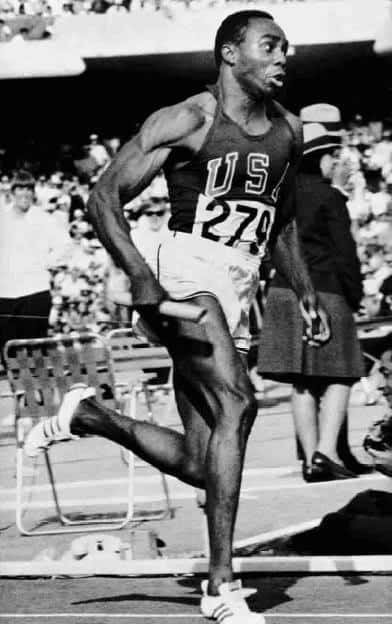 Jim Hines – Mr Hines had the notable distinction of being the world record holder at 100m for fifteen years and was the first man to run below the ten-second mark in the 1968 US National Championships with a time of 9.90 seconds, although it was manually timed. He went on to win the Olympic gold in 1968 with the world record time of 9.95. Like Hayes, he pursued a career in American Football but with considerably less success. 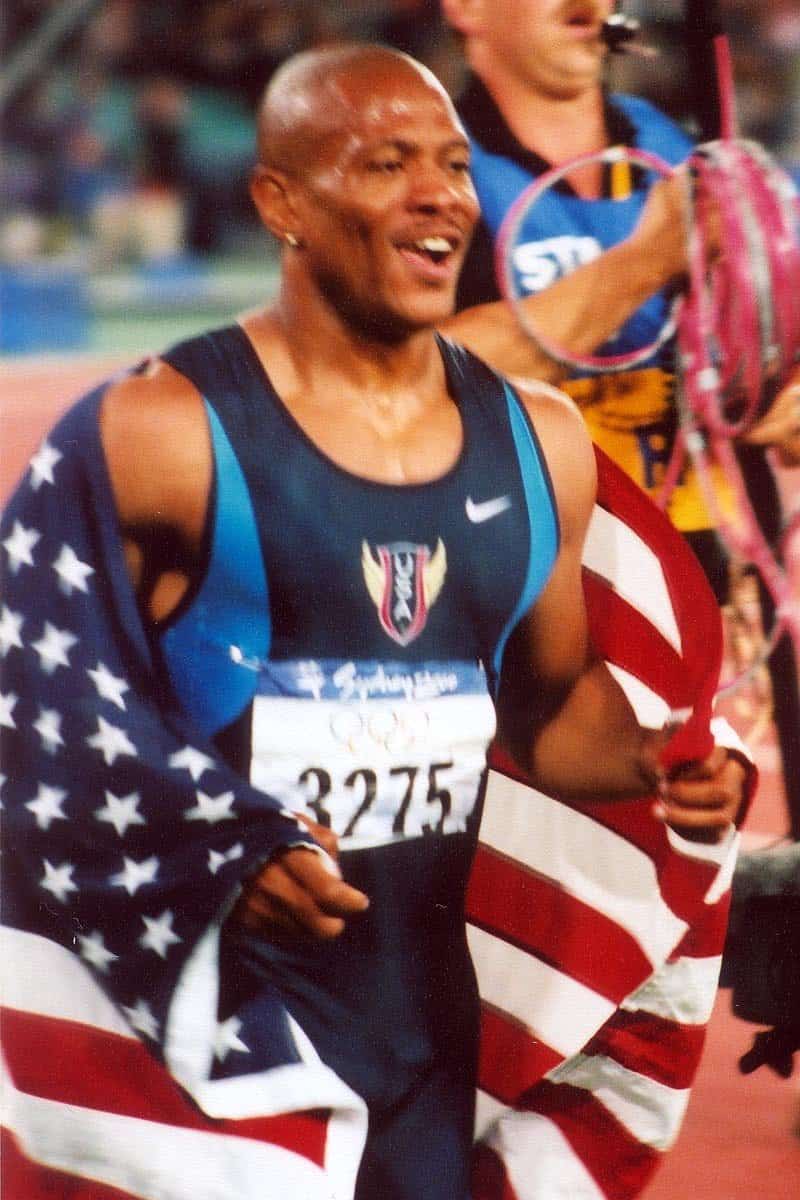 Maurice Green -For a while Maurice Green was the number one speedster in the world. The Sydney Olympics in 2000 saw him win gold, and he won multiple World Championships. The Kansas Cannonball had a fearsome reputation on the track taking few prisoners in his prime. Another former world record holder, Greene clocked 9.79 at his very best. He ran sub ten seconds on over 50 occasions, marking him out as one the all-time greats. 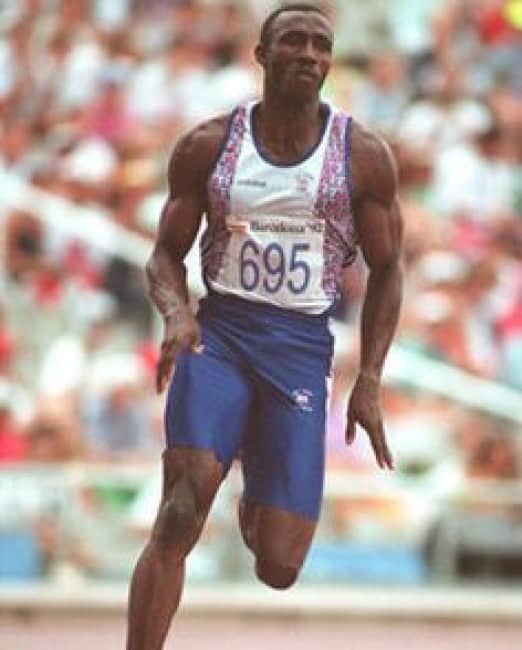 Linford Christie – The greatest British sprinter of all time makes the list for his on-track presence, Christie was an intimidating physical specimen who performed consistently for over a decade. His British record time of 9.87 still stands today, but it was his gold medal-winning performance at the 1992 Barcelona Olympics that was his standout moment, where he became the oldest 100m Olympic champion. 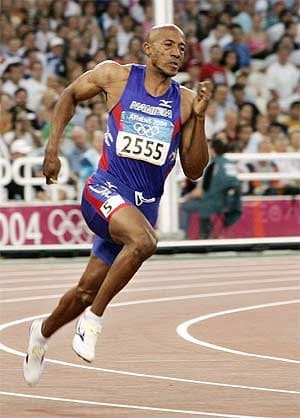 Frankie Fredericks – It was a toss of the coin between Frankie and Ato Boldon, but Fredericks gets the nod for sheer consistency and durability. A superb 200m runner sets him apart as one of the great sprinters. For a bit of perspective, at Atlanta 1996 Fredericks finished second in both the 100m and 200m finals, behind non-other than Donovan Bailey and Michael Johnson respectively. A fastest time of 9.86 puts him up there with the greats, and with seven silver medals he was very much sprinting’s nearly man. 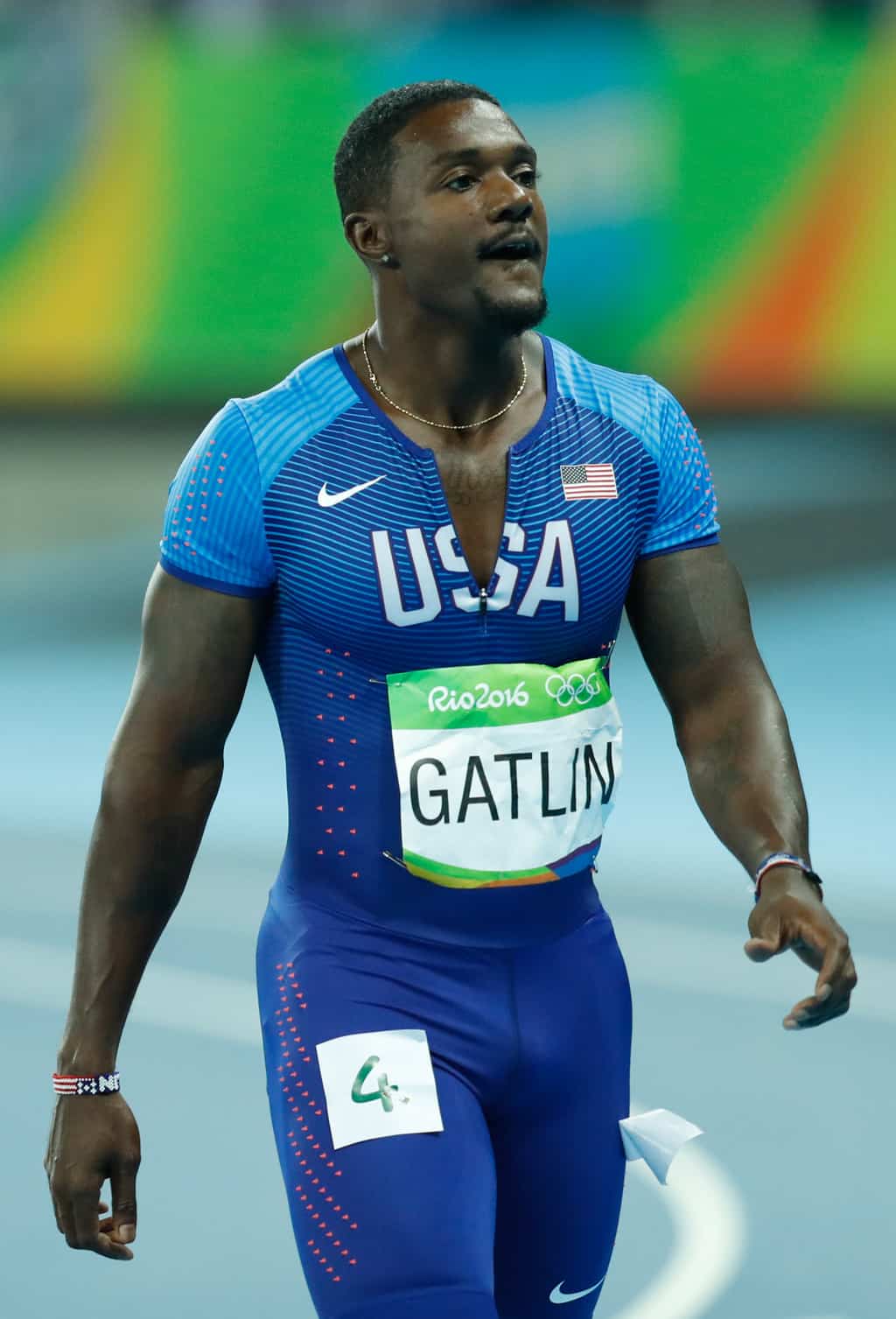 Justin Gatlin – A controversial inclusion we know, especially given the likes of Asafa Powell, Blake and Gay missing out, but for all his misdemeanours there is no getting away from the fact that Gatlin is an incredible sprinter, and he’s a winner. His recent times and achievements in a period where he is by all knowledge completely substance-free have been remarkable for a man of his age. His impressive medal haul and the fact he’s gone under 9.80 mark on seven separate occasions with a best of 9.74, see him make this final.

What would your greatest 100m line-up be? Let us know in the comments below.