The New IT Trailer is Finally Here!

Resident automobile aficionado and The MALESTROM’S very own Q Mr Frank Evans is back with a review of one of the most recognisable cars on the planet. Like an expensive fine wine this motor becomes more palatable and appealing with each passing moment of time.

With it’s sleek and stylish design coupled with its chic interior, it is a car that has become synonymous with consummate luxury and was at one time the stuff of every teenage boys dream. It is of course the Aston Martin DB5.

Desirable tick, quality tick, modern tick. How often do manufacturers sell us on the ideal of a car so deliciously desirable it’s set to become a classic, but then it’s quickly forgotten when the companies even shinier replacement comes along. However, there is a car where the choice to have a model from 1963 or 2013 is still a tough call, and that car is the Aston Martin DB5.

Considering it is one of the most famous cars in the world, readers of The MALESTROM may be surprised to learn that the DB5 was made from 1963 to 1965 and only 1059 cars were ever made. The Aston Martin DB5 was unveiled to the World in September 1963.

The car replaced the DB4 and was designed by Harold Beach and with additional Italian styling by Superleggera.

The car was slower than an E type and more expensive, but was classed as a grand tourer rather than a sports car. The DB5 had an aluminium straight six twin cam 4 litre engine. This developed 282 bhp giving a top speed of 142mph. 0-60 was in 7.1seconds. You had the choice of either a 5 speed ZF manual box or a Borg Warner 3 speed automatic.

The cost, when new, was £4175 and £4490 for the convertible model. Standard equipment in the DB5 included leather seats, wool pile carpets, electric windows, twin fuel tanks, chrome wire wheels and even a fire extinguisher.

Readers of The MALESTROM may be wondering where the car got its name from? Well, the DB was named after the then owner, Sir David Brown, who owned the company from 1947 to 1972. The 5 confirmed it was the fifth in the series. Thank goodness it was not owned by Barry Oldham for example. Just think of James Bond driving a BO5. 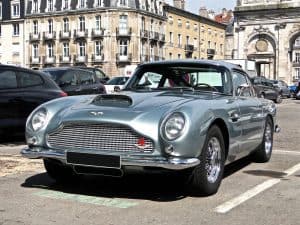 It is testament to Sir David Brown, and the other owners of Aston Martin, that the company is still making cars as the company has been famous for being a low volume car maker that rarely made a profit. Some of you may be aware, from the financial papers, that even in 2017 the company reported a £163 million loss.

In 1964 a high-performance DB5 Vantage was introduced featuring 3 Webber carburetors and revised camshaft profiles. The car produced 315 bhp and a top speed near 160 mph. Only 65 cars were produced in coupe form. You may be surprised to learn that a shooting brake (estate) version of the car was made.

It was thought that this was designed with owner Sir David Brown in mind who was keen on country sports where such a car was well suited.

By now you good MALESTROM readers are probably thinking ok, you’ve told us about the car, now tell us about the star. Well, you have seen the trailers, now for the main feature.

If I were to mention someone who makes films with the likes of Sean Connery, Michael Caine or Daniel Craig, you would be thinking of possibly an A-list celebrity but not in this case. I am talking about the DB5 itself.

Our star made its acting debut in 1964 and had a leading role in the James Bond Film, Goldfinger. It was the first time we saw a bond car with gadgets. There was the famous ejector seat, machine guns in the front grill and a very useful bulletproof shield that was raised up from the back of the car.

The cinema going public were so impressed with the car, and also James Bond, that they wanted to see more. Makers of the James Bond franchise did not disappoint as the DB5 appeared in a further 7 Bond films, Thunderball, On Her Majesties Secret Service, GoldenEye, Tomorrow Never Dies, Casino Royale, Skyfall and Spectre.

The DB5 also made a brief and short lived appearance in the 1969 film, The Italian Job, staring Michael Cain, Noel Coward, Benny Hill and a very young Robert Powell. It is with some regret that I must report that our star was written out of the film early on in the movie when The Mafia caught up with Michael Cain’s gang.

In an act of sheer vandalism, the mafia gang pushed our star and an E Type Jag over a high cliff edge where they were never seen or heard of again.

To borrow a phrase from a Sean Connery Bond movie, ‘Shocking!’ Even Roger Moore got in on the DB5 act but not in a Bond film. This was a Burt Reynolds film called The Cannonball Run which turned out to be one of the most successful films of 1981. It could best be described as a comedy caper about a road race across America.

Our friend Roger played a spoof Bond style character called Seymour Goldfarb Jnr, who also identified himself as Roger Moore the actor. He drove a Silver Aston DB5. The original DB5 reg plate BMT 216A also appeared along side Roger Moore in a 1964 episode of The Saint.

The DB5 maybe coming up to 54 years old but it still keeps up with the modern world of computers and technology . Recently, the DB5 could be see appearing in the computer games version of the James Bond driving games.

It even appears in the London 1969 version of Grand Theft Auto. There cannot be many people who do not know what a DB5 is or looks like, but few will have seen one in the flesh on the roads, as on average Aston Martin made 3 to 10 cars a week and was it only on sale for just 2 years.

With the introduction of the DB11 in the latest Bond film, our star may have to take it easy from now on and enjoy it’s retirement. But not to fear it won’t go short. It was reported in 2013 that one of the original Bond DB5’s with reg BMT 216A, was sold at auction for £3million. This included most of the gadgets in working order, except of course the machine guns.

Younger readers may be interested to know you can buy a toy car version of Bond’s Aston Martin DB5 on Amazon . The price range is from £6.99 to £23.00, so there is hope yet for all of us, to get our hands on the most famous car in the world, or at least a version of it.