Could our worst, most enduring childhood nightmares really be coming true? Is there a Great White shark terrorising Uk waters? It’s long been considered unlikely due to the sea water temperatures in Blighty, however the thermometer has risen over recent years and one expert claims a white is hunting off the edge of Britain’s South coast and an attack is imminent.

The expert in question is Graeme Pullen a man who has tracked sharks in British waters for 40 years and even tags them for the US National Marine Fisheries Service, so you could say he knows his sharks. Graeme’s been after this current one for the last two years, it’s apparently been sighted multiple times off Hayling Island in Hampshire.

With the spot being a popular destination for holidaymakers the tourist board might be searching for a local Quint to catch the beast.

Fishing journalist Pullen said, “Make no mistake, this is the big one. This is surely Britain’s first Great White, and it’ll be coming back this summer.”

A pretty scary prospect for open water swimmers and watersports enthusiasts in the area. Pullen is concerned the shark could be returning to hunting grounds in the shallows, rich in seals and fish. He goes on to say, “The danger is this shark will eventually stumble across someone in a wet-suit and mistake them for a seal.”

In Graeme’s video below locals talk about their sightings of the creature, one fisherman speaks about his nets being torn like tissue paper by a “big shark with teeth.” Another mentions seeing the huge dorsal fin of a shark right next to his boat.

An eight foot blue shark was caught in Illetes near Magaluf last week after terrifying tourists and shutting down the resort in the process. Blue sharks have been responsible for serious attacks on holidaymakers in recent years, but like with most shark attacks it tends to be down to their inquisitive nature, one bite is usually enough to signal that a human does not make for an appetising snack, of course one bite with those razor sharp teeth can do some serious damage. 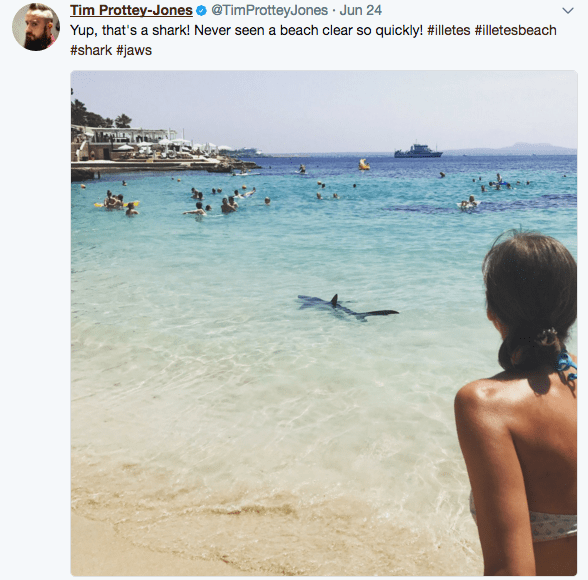 There has been evidence of shark injuries in British waters over the last 100 years, but most of these were carried out on fishermen trying to catch one. To put your mind slightly at ease remember your more likely to meet your demise by being hit by a champagne cork, even getting bitten by Luis Suarez has better odds.

The Sharks Trust lists 40 different of species living in our waters at different periods of the year, but one notable absentee is the Great White. Will it become number 41 sometime soon?