The Most Valuable Squad in the Premier League – Title Odds Assessed

Food on film, ah yes nothing quite gets the taste buds tingling like watching someone else tuck into a mouthwatering slab of meat or a steaming hot bowl of dumplings, a bubbling slow cooked bowl of stew or a greasy, juicy melt in your mouth burger.

Like in Goodfellas when they cook meatball ragu with pasta in the clink, as Paulie delicately slices the garlic really fine so it liquifies in just a little oil or Jules tucking into a Big Kahuna Burger in Pulp Fiction, even the eyeball soup in Indiana Jones and the Temple of Doom is strangely alluring.

There’s no doubt about it, food has its place in the history of cinema and with that in mind and given our propensity for good grub here at The MALESTROM, we take a look at some of the most delicious examples of food on film ever to grace the big screen. Under the radar Millennium masterpiece Dinner Rush is possibly the best restaurant movie of all time. The gripping sense of realism owes much to a wonderful cast and expert direction from Bob Giraldi, as a number of stories meld together under one roof amidst the hustle and bustle of a small New York Italian eatery.

As the restaurant owner and bookmaker on the side Louis Cropa (Danny Aiello) considers handing his beloved business over to his nouvelle cuisine inspired son and chef, his insistence on maintaining a traditional menu belies the mesmerizing cooking of his talented offspring.

Taking place over the course of one evening Louis struggles to maintain his sanity as the restaurant fills up with a cross section of the city’s good and bad, including rival bookies who want a piece of the action, a voyeuristic Wall Street trader there for the kicks, an antagonistic celebrity food critic, a local police detective and a sous chef with a gambling addiction.

Like a wonderful piece of theatre, this film is choreographed to perfection and it’s stellar cast of largely unknowns rise to the occasion like a chocolate soufflé, Dinner Rush is a banquet for the eyes and ears. 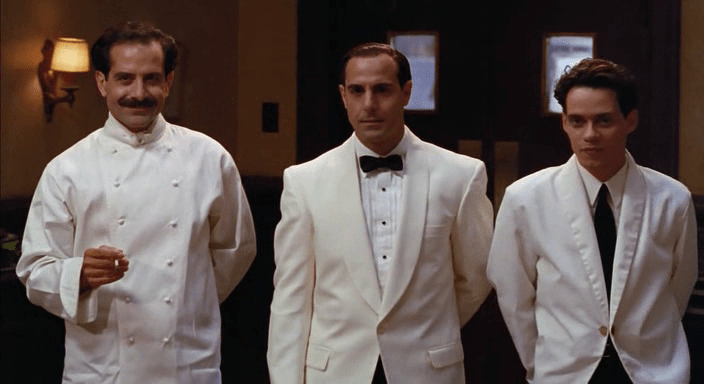 This small, low budget affair punches well above its weight thanks to some fantastic performances, a very funny script and superb direction that all combine to leave you salivating for more.

When brothers Primo and Secondo arrive in the US full of big dreams and a thorough understanding of the finest Italian cuisine, their hopes to build a successful business by running an authentic Italian eatery are quickly dashed as they learn, much to their consternation, that in America proper Italian food is something quite different.

And when a customer requests a side of spaghetti and meatballs to accompany a most beautifully crafted risotto, things reach boiling point.

A genuinely superb film, densely filled with humour and some tantalizingly tasty looking grub, if the breakfast scene at the end doesn’t have you busting for an omelette then well you mustn’t like eggs, and even then! There’s also early signs of Stanley Tucci’s burgeoning Hollywood gravitas. 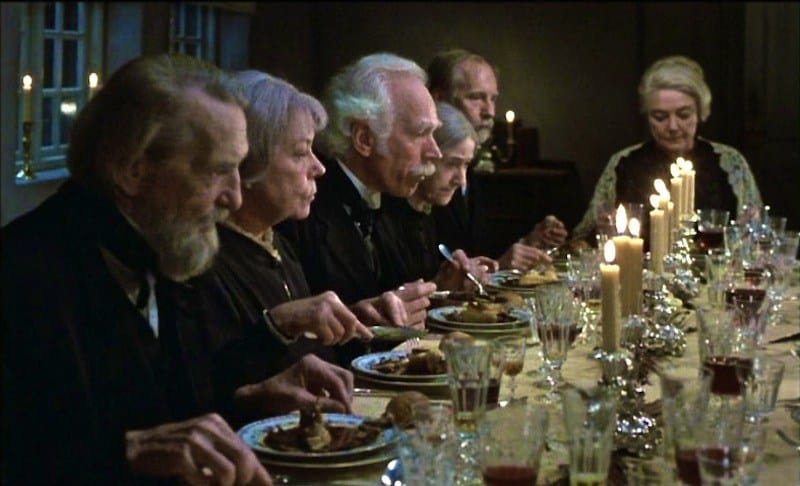 This Oscar-winning Danish drama is a timeless celebration of culinary excellence and the sheer joy and fulfillment of sharing good food and drink with one’s nearest and dearest. A patient and subtle story, Babette’s Feast is awash with some of the most mouthwatering culinary creations ever shot on film.

Aging sisters Phillipa and Martina have dedicated their lives to religion, sacrificing their hopes and dreams to fulfill their ministerial Father’s wishes and after his death continue to serve the small town of Jutland’s declining congregation. Forsaking the devilry of indulgence the austere nature of their lives is turned upside down when Parisien refugee Babette Hersant appears at their door seeking work as their housekeeper.

What follows is almost a parable for gaining a second chance at life as Babette brings artistry and know-how from her former life in the French capital to open the windows to the soul of the subdued residents of this small Danish village. We won’t spoil the plot, but the banquet finale leaves you feeling hungrier than a tick on a toy dog. 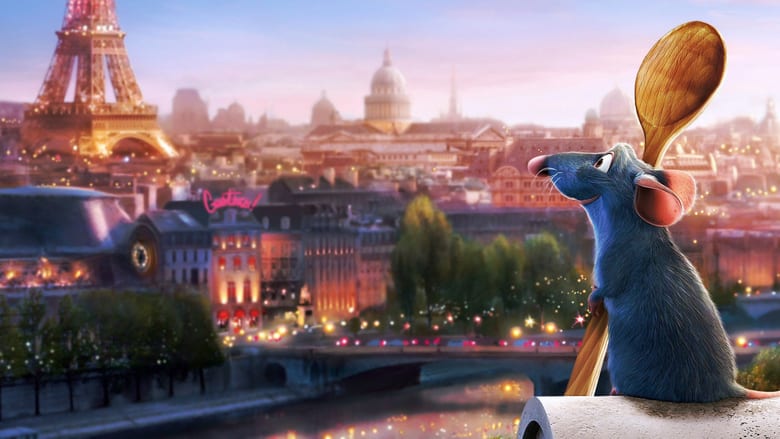 Brad Bird the genius behind The Incredibles was once again on writing and directing duties for Pixar’s enormous box office smash Ratatouille. Following the travails of rodent Remy who dreams of following in the footsteps of his celebrated gastronomic hero Auguste Gusteau. This wonderfully animated tale is a frantic and fun-filled experience that highlights, as with all Pixar creations, how discriminating with age-old preconceptions can leave you… well with egg on your face.

Superbly voiced by a fantastic cast, in particular, a sublime turn from the late Peter O’Toole as the miserable, yet demanding food critic, Ratatouille is your typical animated underdog feature, however, the attention to detail and understanding of the high-end culinary landscape make this equally absorbing for both young and old alike.

Never has animation been quite so mouthwatering, and it did wonders for our universal disgust of the dreaded rat, well for a short time at least, maybe that’s the real lesson. 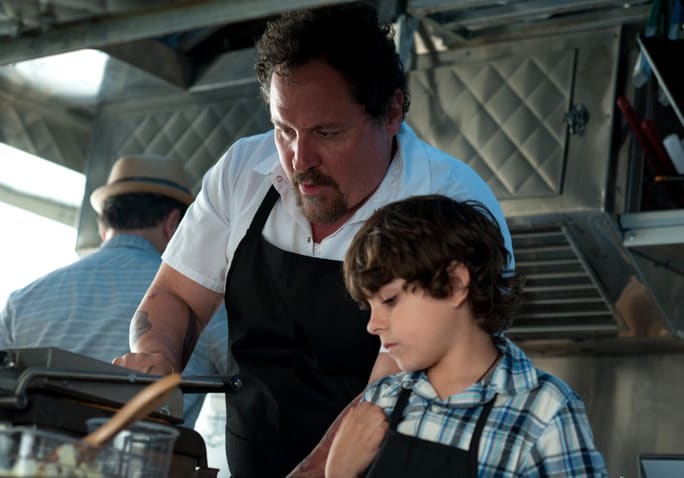 Clearly a passion project, 2014’s Chef saw one-time indie king Jon Favreau step out of the mainstream and some way back to his roots with this easy to watch dramedy about Carl Casper, head chef at a Californian restaurant who, shackled by a cautious and traditional owner, is unable to allow his innovative culinary creations bear fruit.

After a scathing review from a food critic and a public social media spat, Casper quits and begins a gastronomic road trip with his neglected son, that results in them purchasing a food truck that enables his sumptuous food to reach a bigger audience.

This film delights in the detail, with great attention having been paid to food trends and up to date gastronomic attitudes, plus Favreau himself has clearly sharpened up his knife skills. 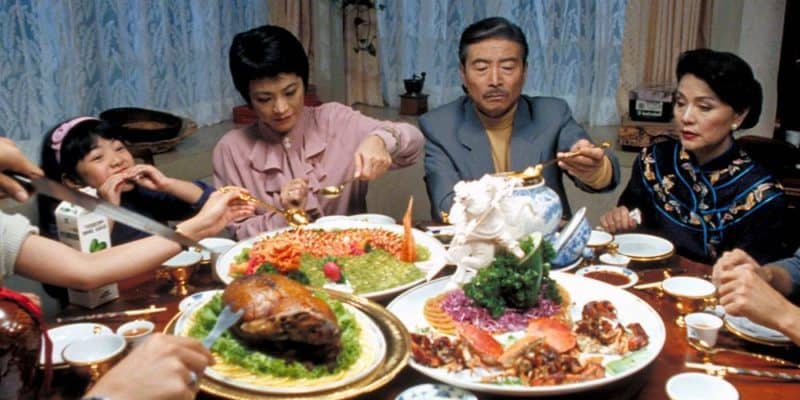 This coming of age comedy-drama written and directed by Ang Lee was later remade to less success in Hollywood as Tortilla Soup, but where the latter lacked the substance of the original what they both have in common is the mouthwatering cooking sequences that will leave you decidedly famished.

The story follows the life and times of the Tapei daughters who still unmarried, live at home with their widowed patriarch Father – Chu, a Master Chef who happens to be losing his sense of taste. As the three girls navigate adulthood facing a variety of challenges and relationships, they gather around the dining table each Sunday for a banquet cooked up by their Father.

It is in these moments that the challenges and troubles synonymous with any family dinner come to the fore, and the tangled web of relationships expose a generational gap that only food can fix.

There are so many incredible cooking scenes in this charming and well-imagined film, but if the opening scene doesn’t have you rifling through the cupboard for those takeaway menus, nothing ever will.

What’s you’re favourite piece of food on film? Let us know in the comments.