In a collaboration that brings together two iconic brands, Carhartt WIP has teamed up with Clarks Originals to bring us two variations on the most original of all footwear classics, the Wallabee Boot.

Having been busy in recent years joining forces with other luminaries such as the Wu-tang Clan, Clarks Originals have once again gone old school with a definite nod to the current skate-wear boom with this feted venture.

Either way, this is definitely an alliance that got us very excited, particularly given our penchant for the Wallabee silhouette, probably the greatest boot ever made. And, as nineties nostalgia continues to grip, this all makes even more sense.

Back in the day, whether it was the Britpop boom and the like of Richard Ashcroft, Liam Gallagher, roots reggae style, or the aforementioned Wu-Tang Clan all sporting Wallabies in 1993 circa 36 Chambers, this a boot that’s stood the test of time.

There are some interesting collaborations that Clarks have got involved in recent times, whether it’s Black Panther, Supreme or even Disney! But Carhartt has got to be the best yet.

Both versions of the boot take cues from Carhartt WIP’s DNA. The Brown Combi colorway is informed by the hue of Hamilton Brown Canvas associated with some of the brand’s archetypal garments, such as the Michigan Chore Coat. 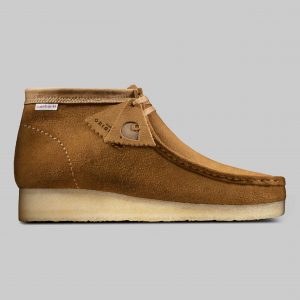 Meanwhile, the Olive Camo colorway nods to Carhartt WIP’s incorporation of military references into its collections – a recurring theme since the brand began creating its own collections in the early 1990s. 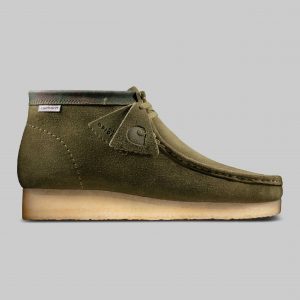 Details also draw from classics, with brown and camouflage canvas trims offset by triple stitching, as well as a woven Carhartt WIP label.

Both shoes feature Clarks Originals’ renowned crepe soul and a plush upper created from Charles F. Stead tannery suede. This suede is both stain and water-resistant. Additionally, the two styles include a lace fob with Clarks Originals and Carhartt WIP co-branding.

This is definitely an alliance that got us fired up, particularly given our penchant for the Wallabee silhouette.

Both pairs are available from September 5th.