Some of the Strangest Urban Legends

With the Premier League transfer window slamming shut earlier than usual this year some fans will be decidedly happier than others. New boys Fulham and Wolves have made a huge statement of intent, in particular, Fulham who became the first ever promoted side to spend in excess of £100 million. Brighton have snapped up eleven new faces, while West Ham, Everton, and Leicester have all spent big in their attempts to be best of the rest or furthermore burst the top six bubble.

Liverpool have been the biggest spenders, addressing long overdue goalkeeper issues, while upgrading a perceived lack of creative options in the midfield area, while rivals Man Utd came up short in their efforts to get Mourinho’s first choices over the line, actually, they didn’t manage to get his plan B’s in either. Perhaps most surprisingly Tottenham is the only team in the country not to add a new face and moreover the only team since the transfer windows inception not to sign a player.

How does this affect the potential success or failure of the elite this season? Well, betting bigwigs Odds Monkey have calculated the value of each Premier League team and worked out the relevant odds in relation to where the best value for money lies in terms of Premier League success this season. With the curtain raiser just hours away, how much is your team worth, and where does the smart money lie this season? 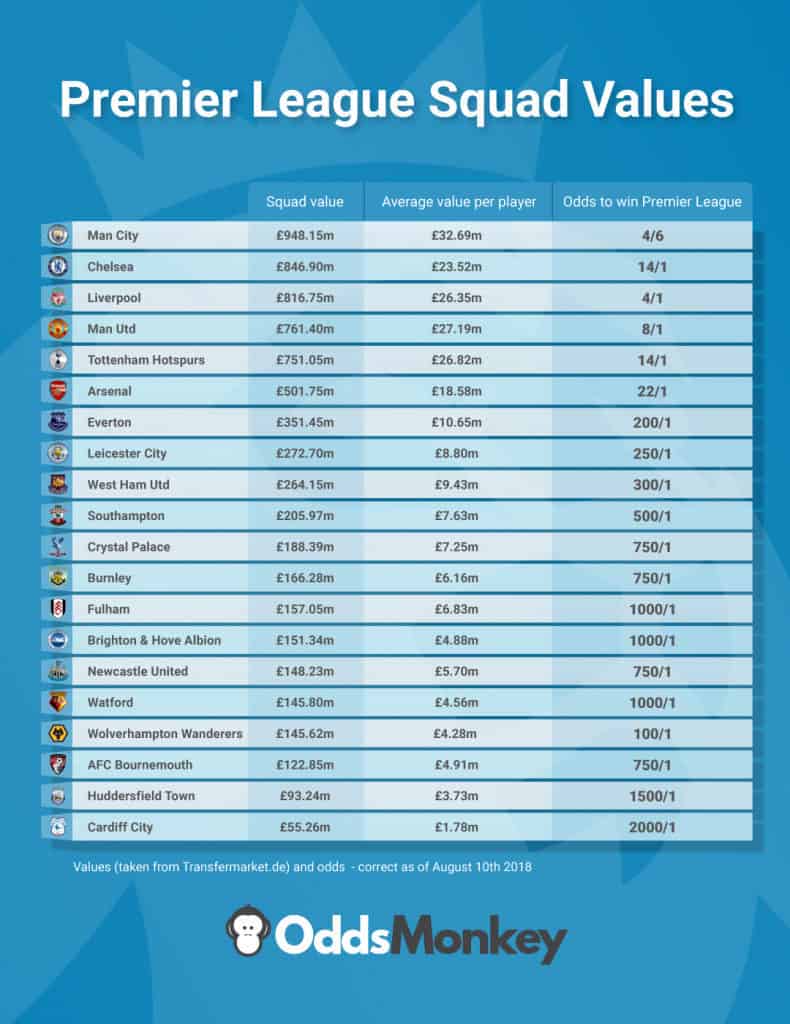 It probably isn’t a huge shock that reigning champions Manchester City come out on top with a squad value almost hitting the £1billion mark at £948million.

Indeed, the Premier League’s top-six are that for a reason and they fill those spots  – although Manchester United find themselves in fourth behind City. Chelsea (£846m) and Liverpool (£816m).

Then come North London duo Tottenham – who became the first club since the current transfer window system was introduced not to sign a player in the summer – and Arsenal.

Of the rest, it is little surprise to see newly promoted Cardiff propping up the table with the lowest value squad – only £900million less than Manchester City.

We also looked at the contenders, the top-six and analysed them along with the odds, to see who was offering the best value for the title – given their squad values.

And coming out on top is Unai Emery’s Arsenal – possessing a squad worth over half a billion pound, but still, with odds of 22/1, they present the best value in the market, ahead of rivals Tottenham and then Maurizio Sarri’s Chelsea.

Manchester United are fourth when it comes to value. but it is unsurprising that favourites Liverpool and Manchester City are offering little in terms of the value  – compared to their rivals, especially as City are odds-on at 4/6. 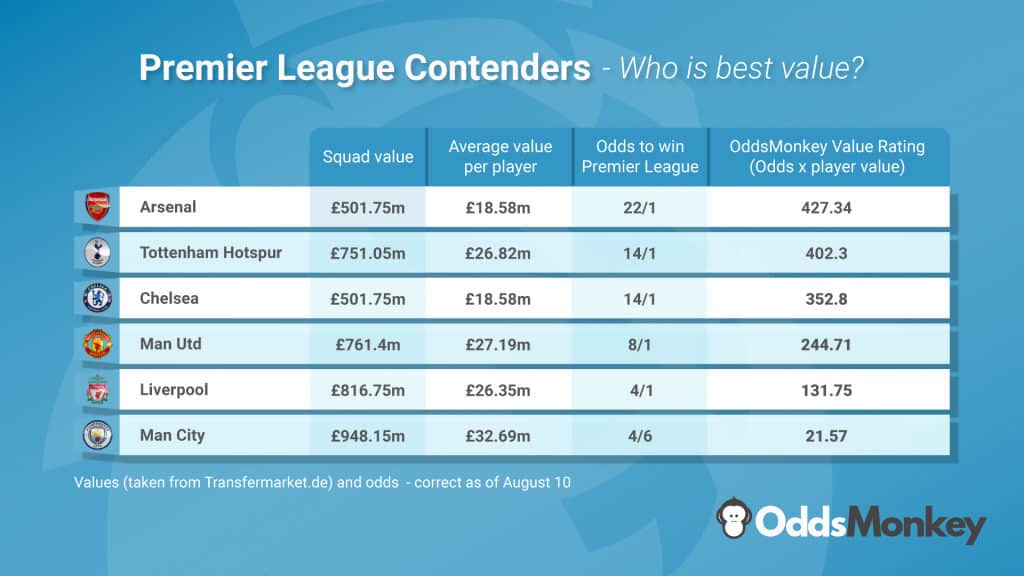 “We thought it would be hugely interesting to compile this research and look at the values and we are not disappointed. We all know just how good Manchester City are, but to see their squad value on paper – worth nearly £1billion, that is just staggering.

The top-six are what they are in, but even in there we say big gaps from Arsenal and Chelsea – almost half the price of City. Then we go down to the bottom end, and we see Cardiff City at the bottom – which again doesn’t surprise many but highlights that we very much have leagues within leagues in the top-flight.”

Visit https://www.oddsmonkey.com/ for all your betting needs.